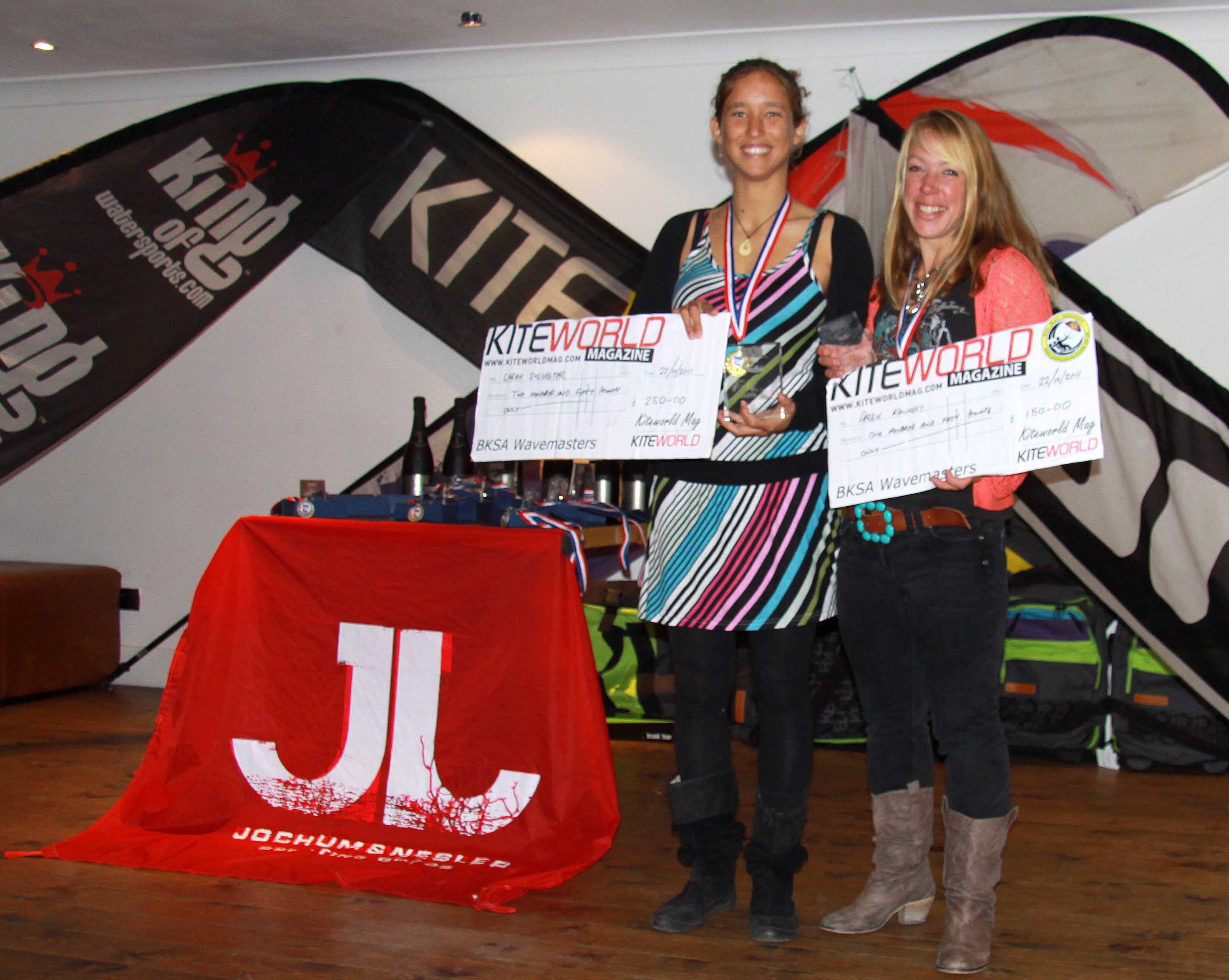 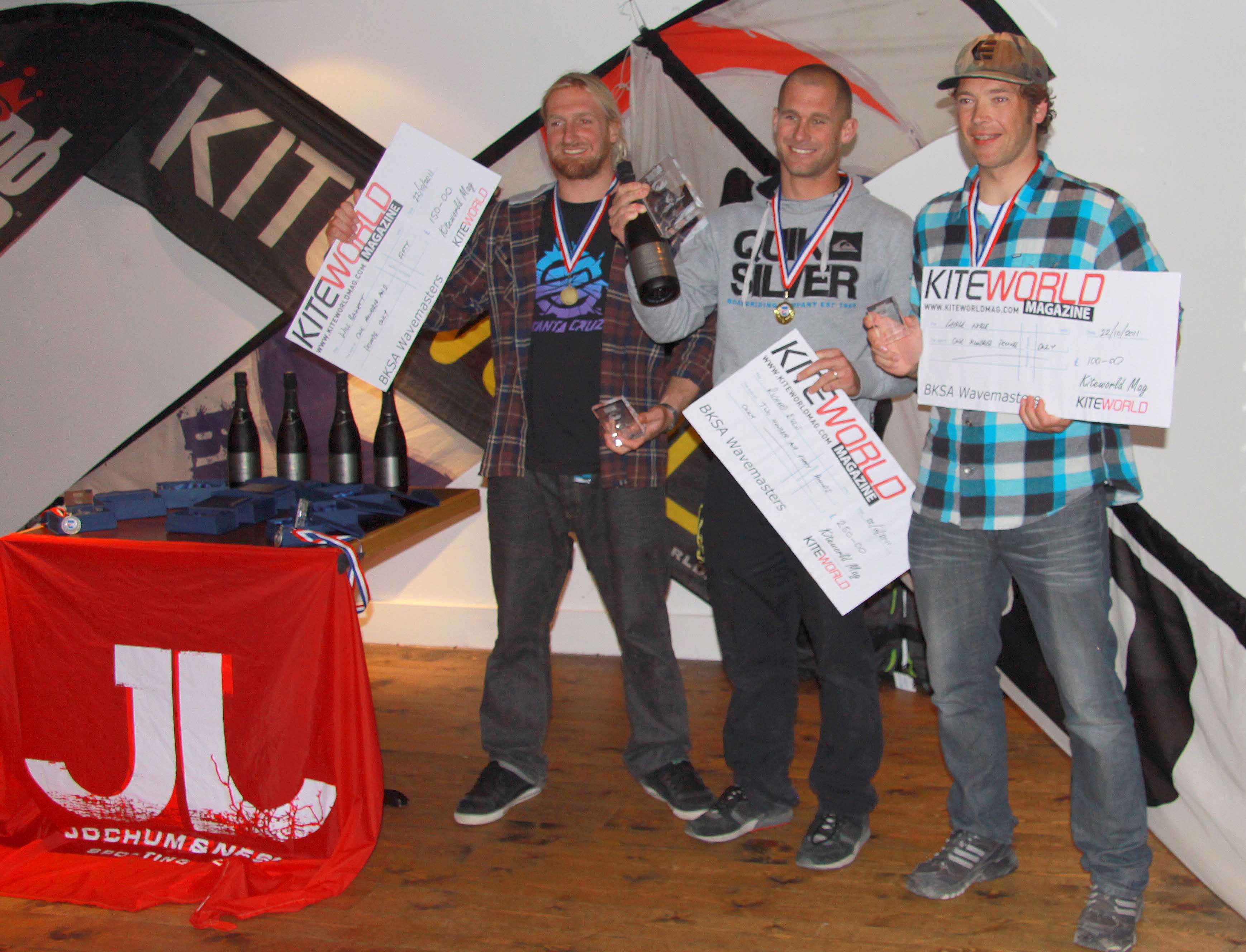 Day 1: Mon 17th Oct, kicked off (some might say ‘wandered’ off) with a mad dash to unlock a council controlled gate and allow launching of the rescue ski, but once that was resolved the Ladies fleet swung into action with solid performances across the board.  Riders made the most of cross-on, shoulder-high Gwithian and even newcomer, Sammy Wiseman, showed how to have fun on limited experience.  The top-tier ladies really turned it up to 11 though, with an impressive final giving Sarah Sylvester the win, followed by Debbie Kennedy in 2nd and Steph Bridge in 3rd.

Day 2: Tue 18th saw the comp back at Gwithian – this time for the Men’s Open fleet.  Difficult conditions and variable winds had the black flag flying on several occasions, but the pro men made the best of it and hammered on through.  The day ended with the Men’s Open fleet completed and a first time win for local rider Richard Sills, knocking stalwart Will Bennet off the top spot for the first time in three years!  Will turned in an impressive 2nd place though, with Scotland’s George Noble taking 3rd.

Day 3: Wed 19th and conditions dictated a move to The Bluff for the Men’s Senior class.  With the kind permission and assistance of the Kernow Kitesurf Club and Hayle Harbour Authority, the Senior Men (or ‘Masters of the Masters’) were able to enjoy some cross-shore action in the estuary mouth, albeit in yet more patchy wind.  Despite repeated appearances of the dreaded black flag the seniors showed their years of experience and made the best of some pretty challenging conditions.  Day 3 wound up with Trevor Hale taking 1st, with Paul Stebbings in 2nd and another Scot, Richard Wiseman, in 3rd.

Day 4: Thu 20th was forecast for no wind, so riders made the most of the rest-day and headed out to enjoy the stunning Cornish scenery and even grab a few (windless) waves… and more than a few Cornish Pasties. 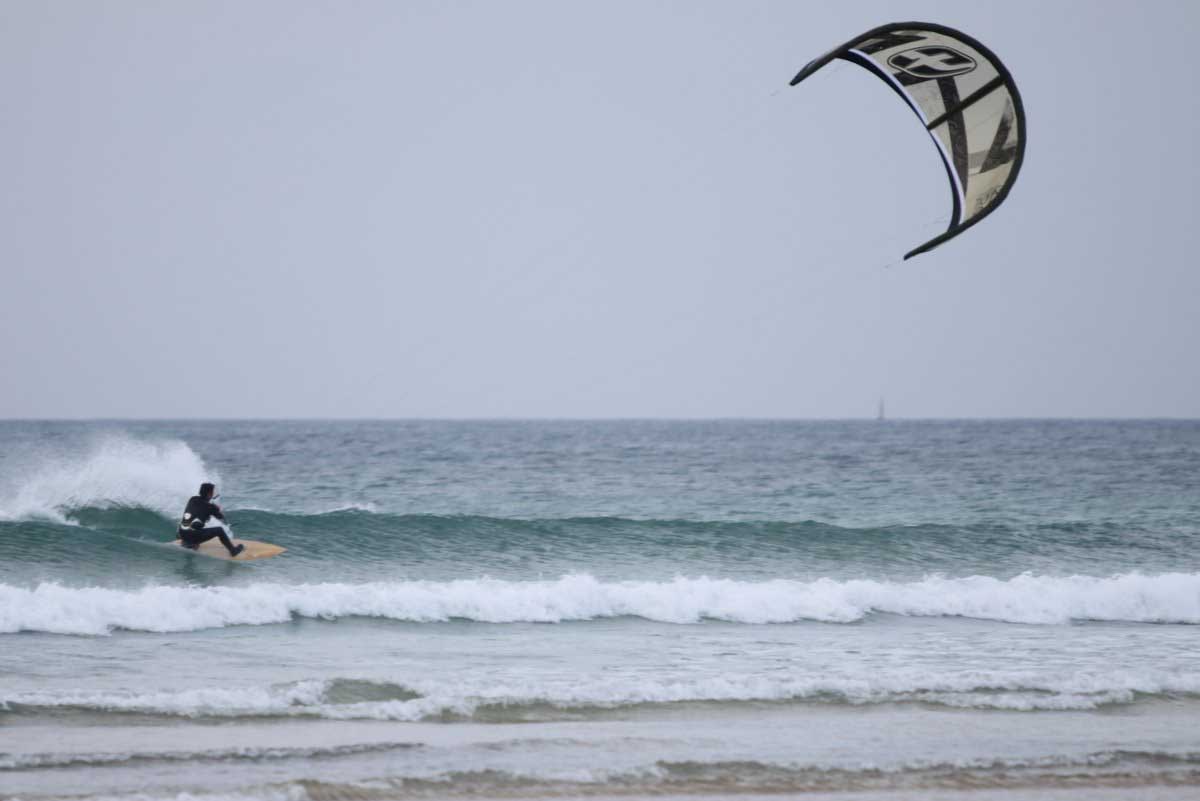 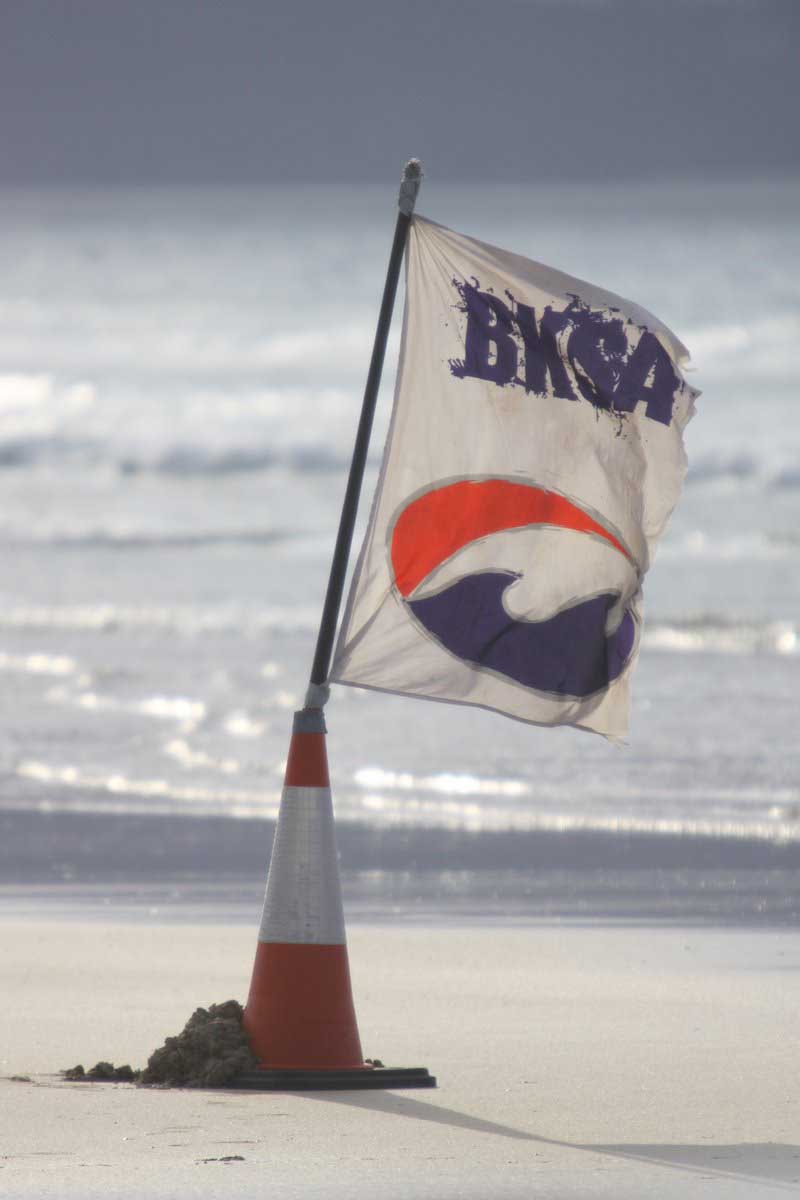 Day 5: Fri 21st and the comp moved back to the golden sands and glassy sets of Gwithian for a rider-judged jam.  Riders went out as entire fleets for 30 minutes at a time and were judged by the two fleets not competing.  Although winds were light, the surf was small but incredibly clean and the 30 min rounds gave riders plenty of time to run back up wind for another go.  Smiles were the order of the day, and with non-competing riders helping tow their comrades back up wind this proved to be a great way to spend a marginal day in the surf.  Marc Rowley took first in the Senior’s Jam, followed by Trevor Hale in 2nd and Neal Harper in 3rd.  In the Ladies, Debbie Kennedy grabbed 1st with Sarah Sylvester and Sarah Meager coming 2nd & 3rd respectively.  And finally, the Men’s Open Jam saw George Noble take top spot, with Richard Watson in 2nd and Daniel Morrice taking 3rd.

Day 6: Sat 22nd and with high tide around midday things were set to be challenging.  Marazion was considered, but launching the ski directly into breaking surf was too risky, as was running the comp in dead on-shore winds with a large sea wall directly down wind.  Instead, it was decided to stay at Gwithian and hope for marginal winds and improving surf as the tide dropped.  Unfortunately, as the tide dropped so did the surf and the wind, so the second jam comp had to be cancelled.

Despite a disappointing last day on the beach, the riders made it to Sandsifter on Saturday evening for a buffet and the prize giving ceremony.  With prize money from title sponsor Kiteworld Magazine, and with product prizes very generously provided by North Kiteboarding, Ion and King of Watersports, riders left with full bellies and a stack of loot.  The winner of the King of Watersports ‘Best Wave/Trick’ prize was Richard Burton and his patented ‘dickflip’; a kick flip floater that’s quite something to see with a surfboard!

Huge thanks to all the sponsors and supporters of the BKSA Kiteworld Wavemasters 2011, and special thanks to those people on the beach that kept this week-long competition going; Lisa, Tessy, Josh and of course, Phil ‘The Skiman’ Elborough.  Massive thanks also to Richard & Sarah of J&N UK for their support and help, and to the Hayle Harbour Authority for generous use of their slipway and of course to Doug at Sunset Surf Shop & Cafe for allowing us to take over his place for the daily rider briefings.  And finally, thanks to all the riders who turned up to show us  – and everyone else – just how far the level of kitesurfing has progressed in recent years.

See you all next year, 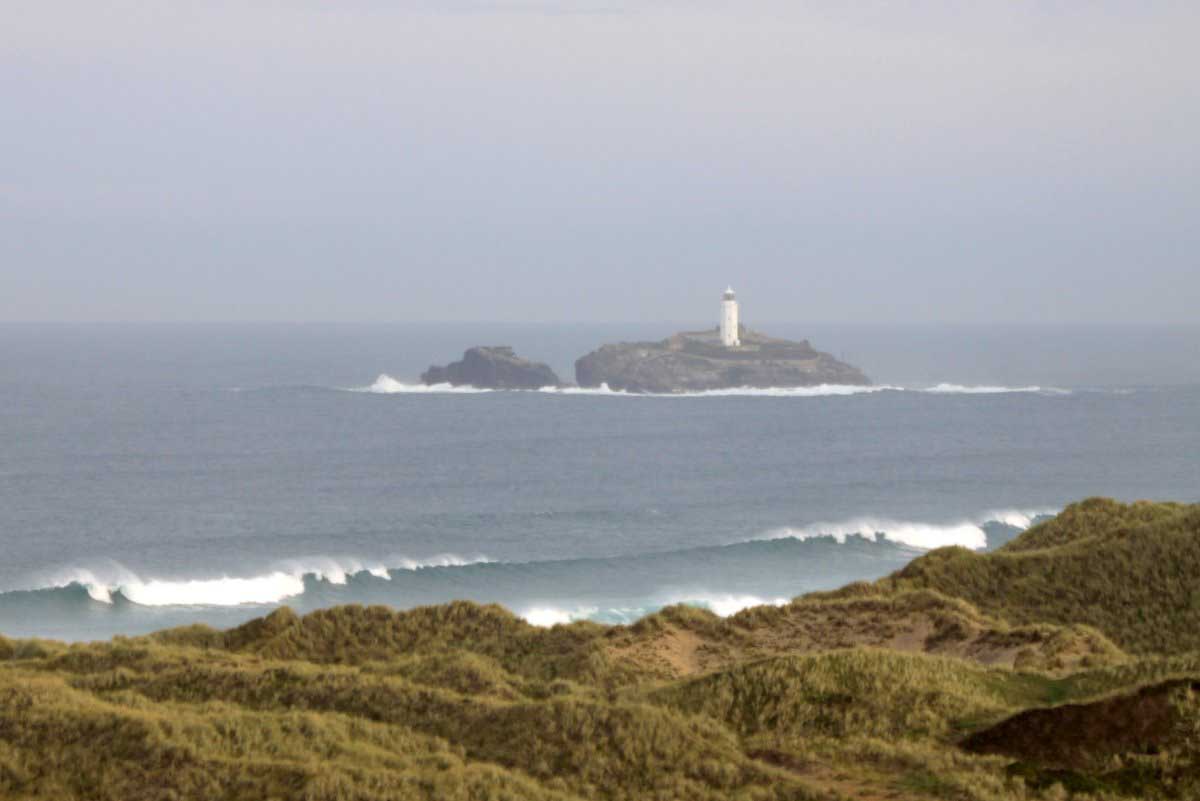