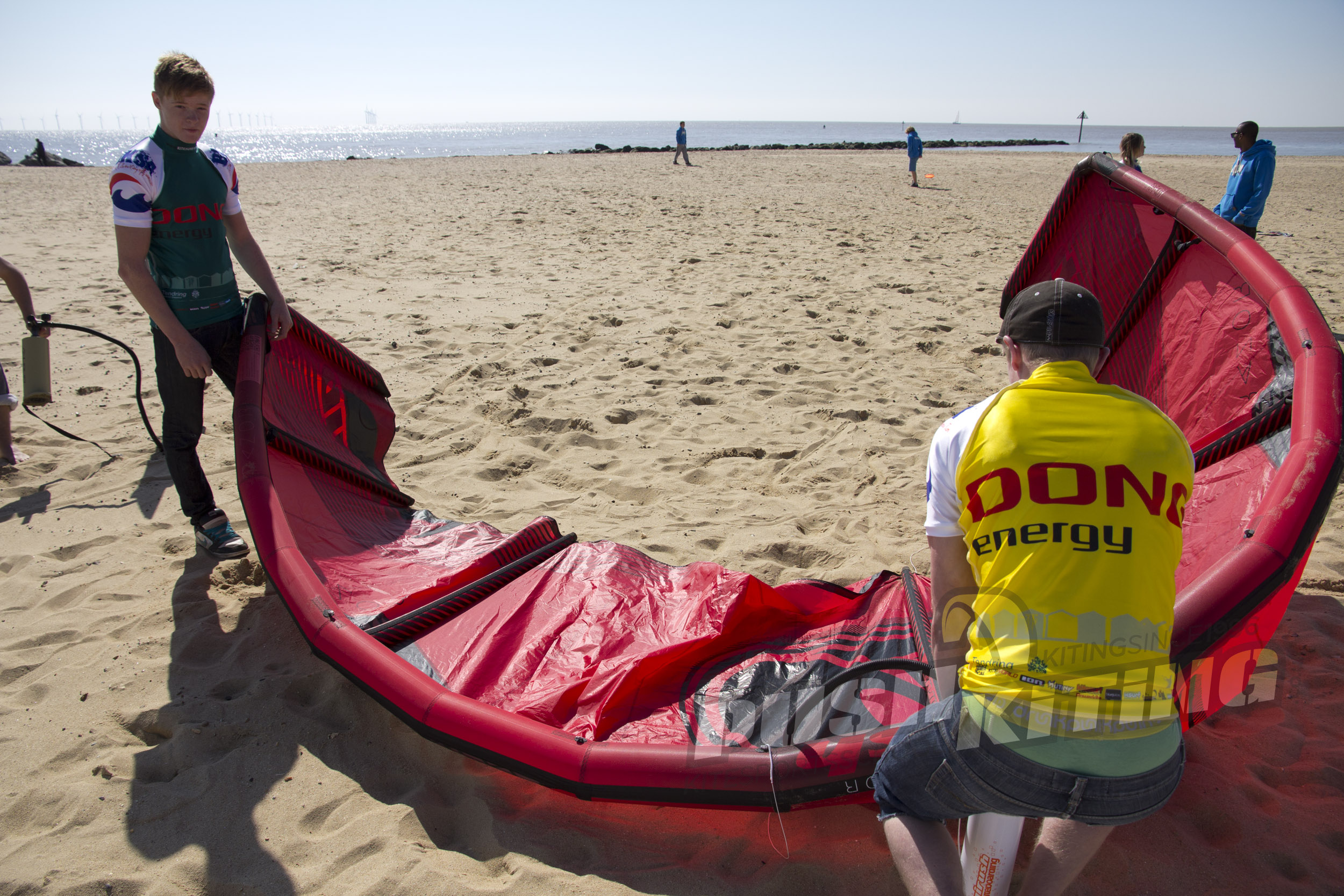 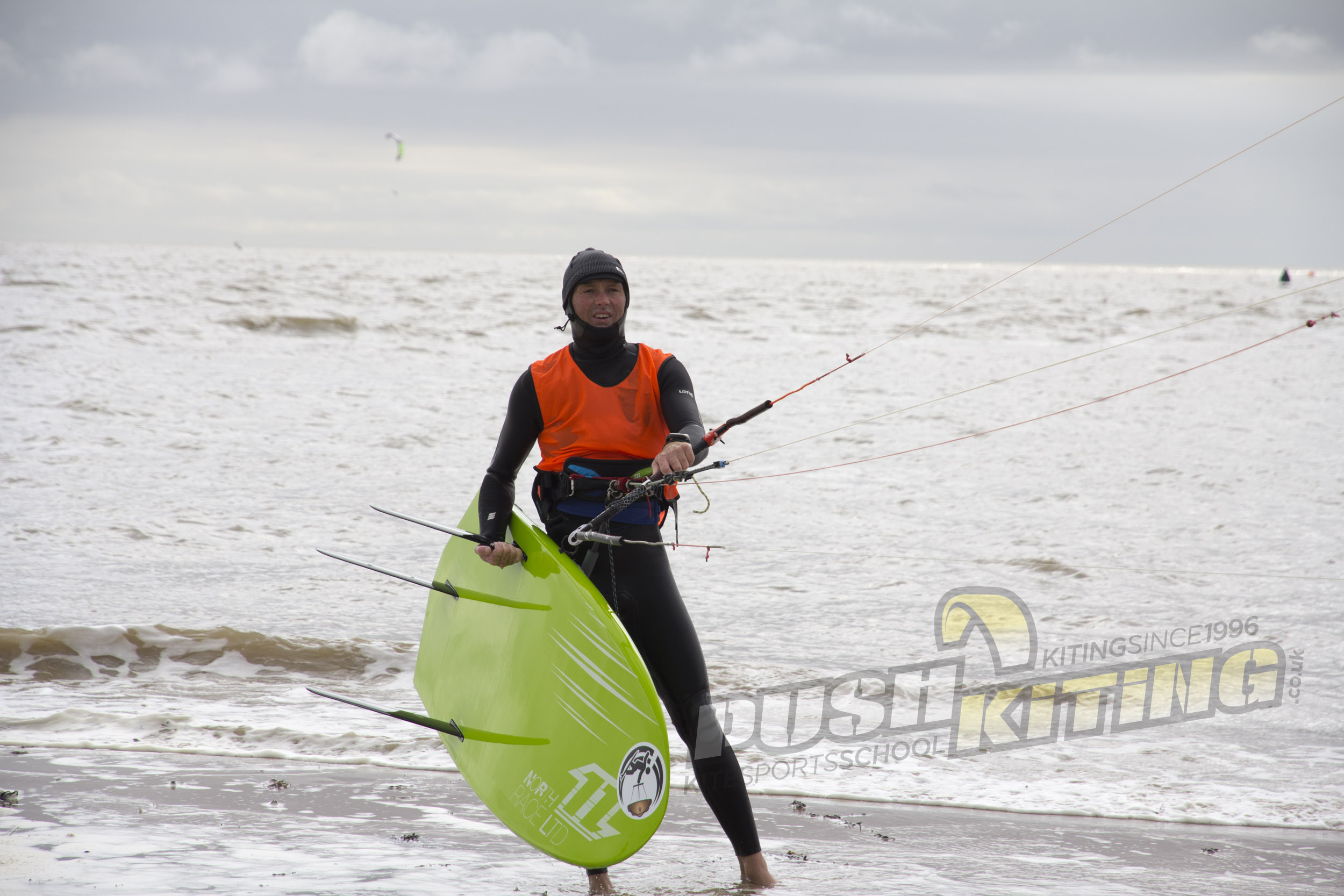 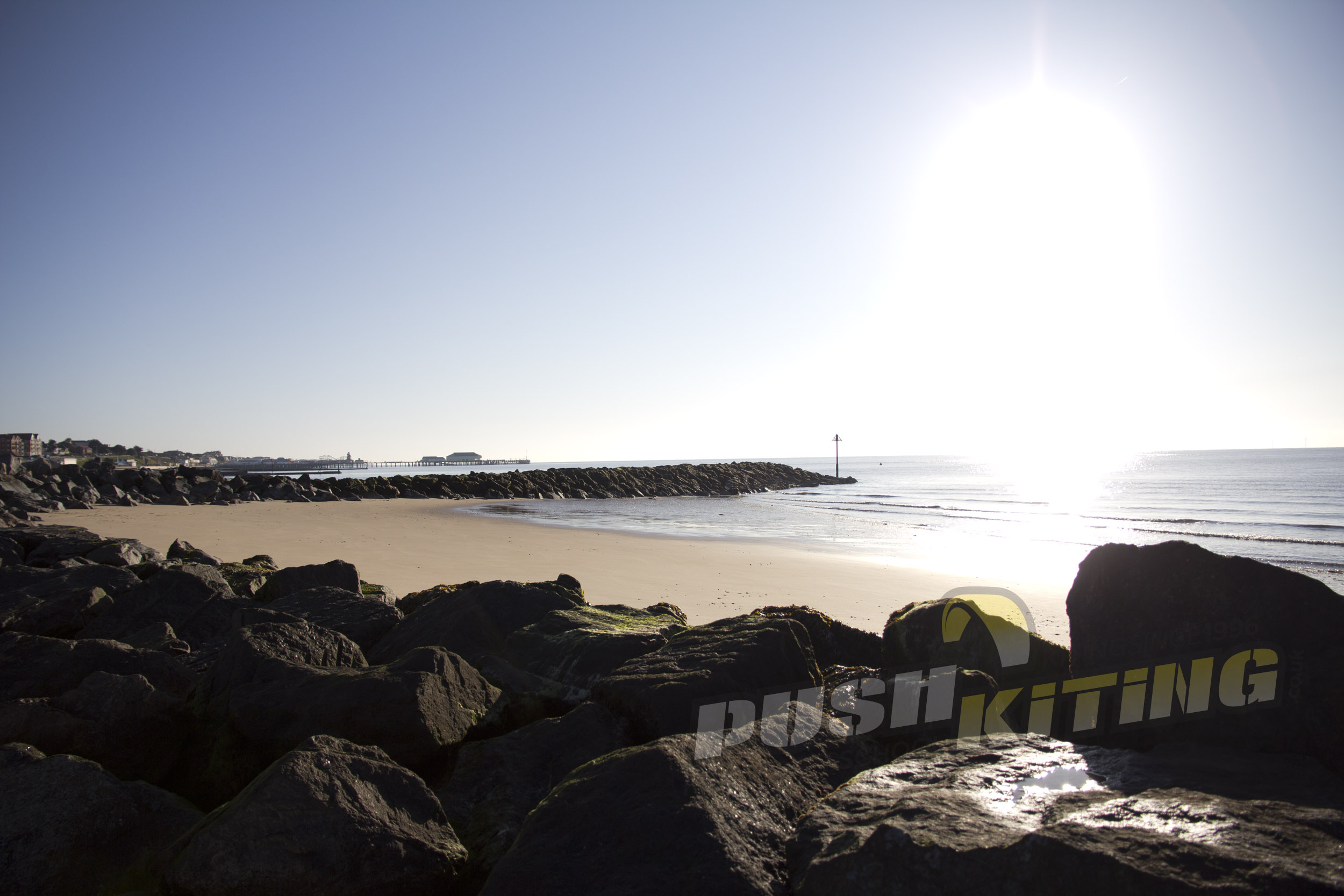 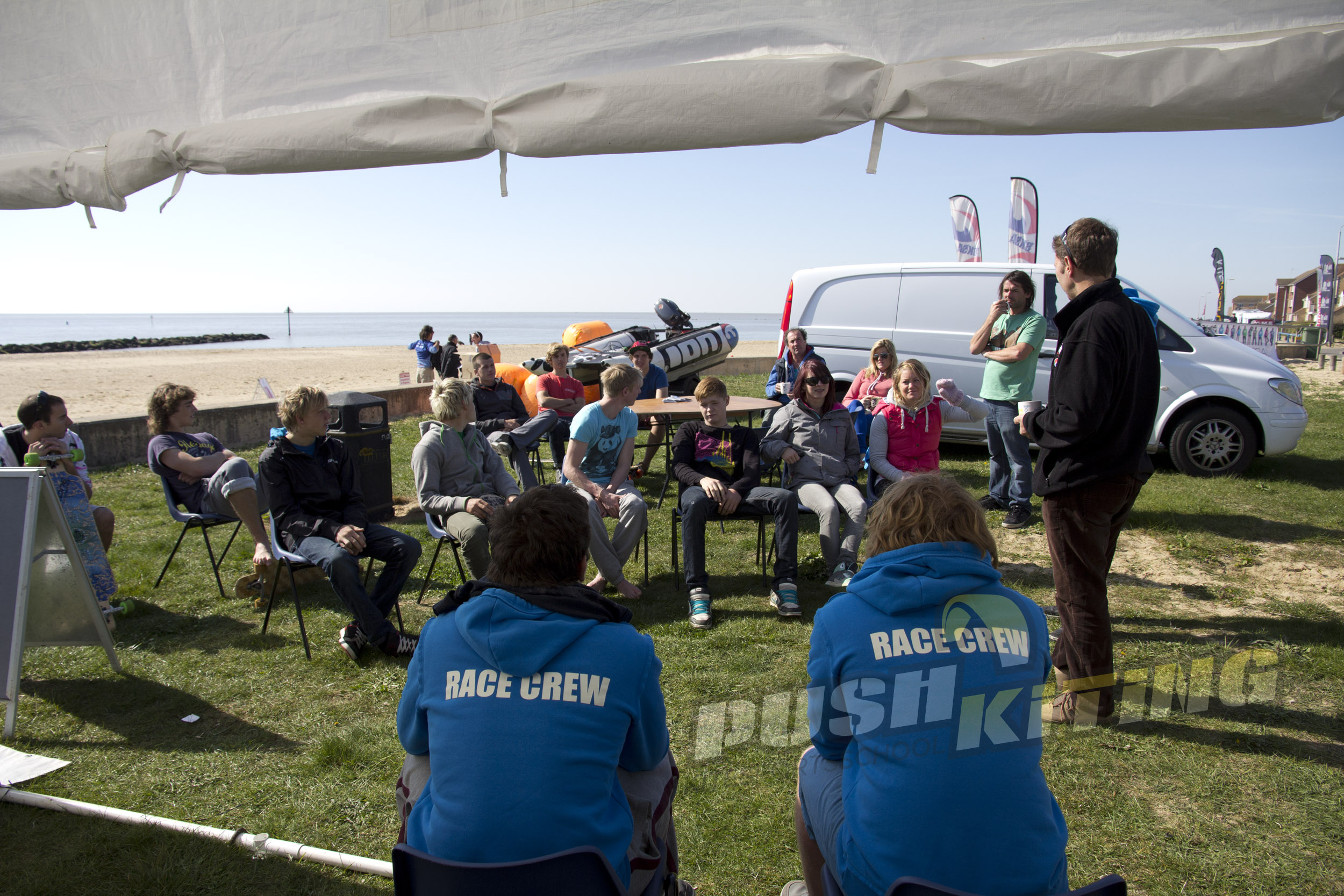 So the first event of the season kicked off over the Easter Weekend with the first National event in Freestyle Kitesurf and Race to be held at this new venue of Clacton.

The forecast for the 3 days was not looking that windy however a keen amount of competitors were registered to do battle whatever the weather.

The Pro Men and Ladies were registered and all set to go – with the sun out and not a lot of wind many people caught up and chatted with each other’s they have not seen all winter. Eventually the wind picked up from the South just after lunch and there was some hope to kick things off.
A couple of the racers went out to check out the conditions; however it just was not quite enough to run the freestyle.

The guys from Push Kiting and Edgeriders were on hand telling people about kite flying and letting people have a go with the small power kites.

Friday evening a BBQ was held just down from the event site with all the rest of the fleets attending. 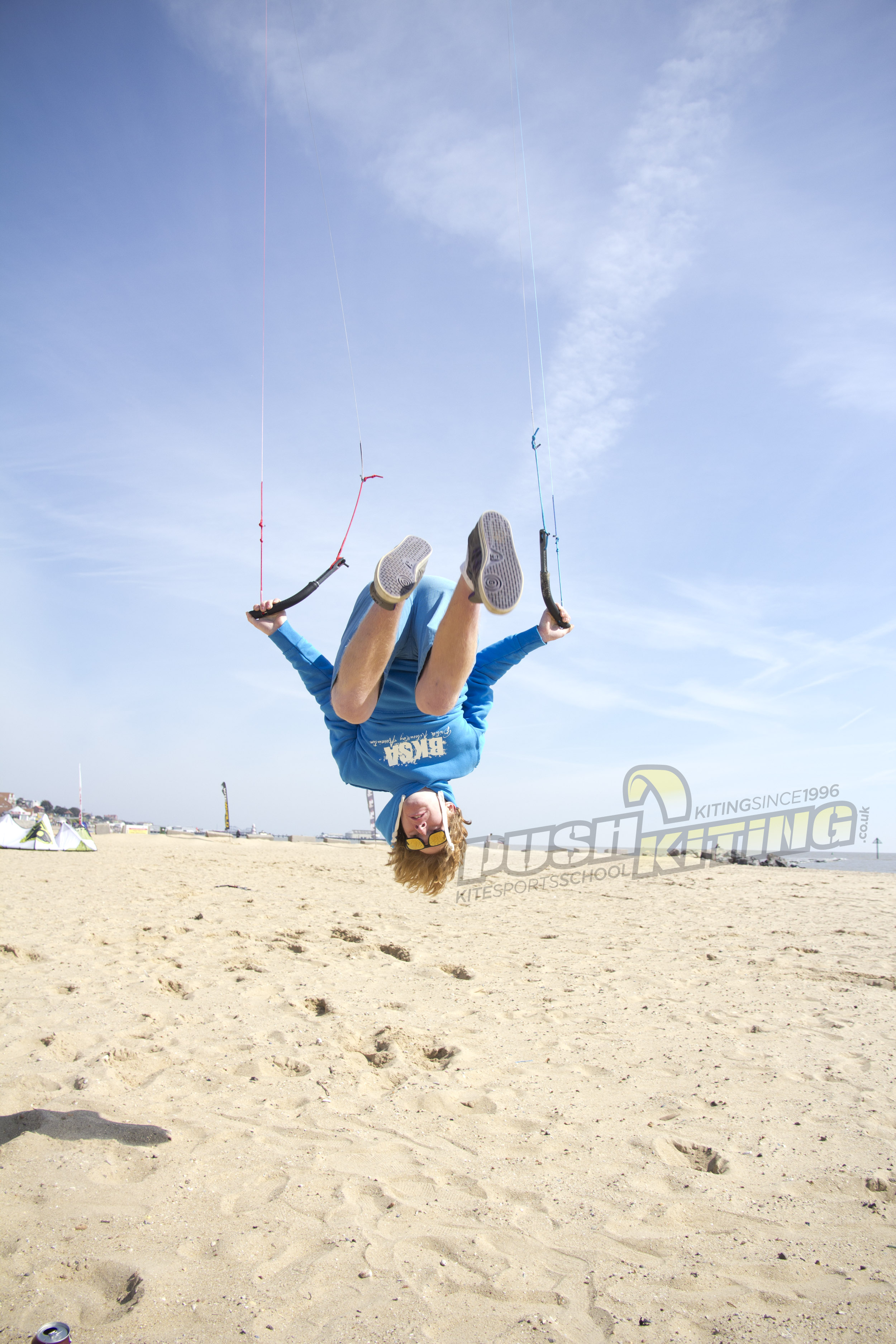 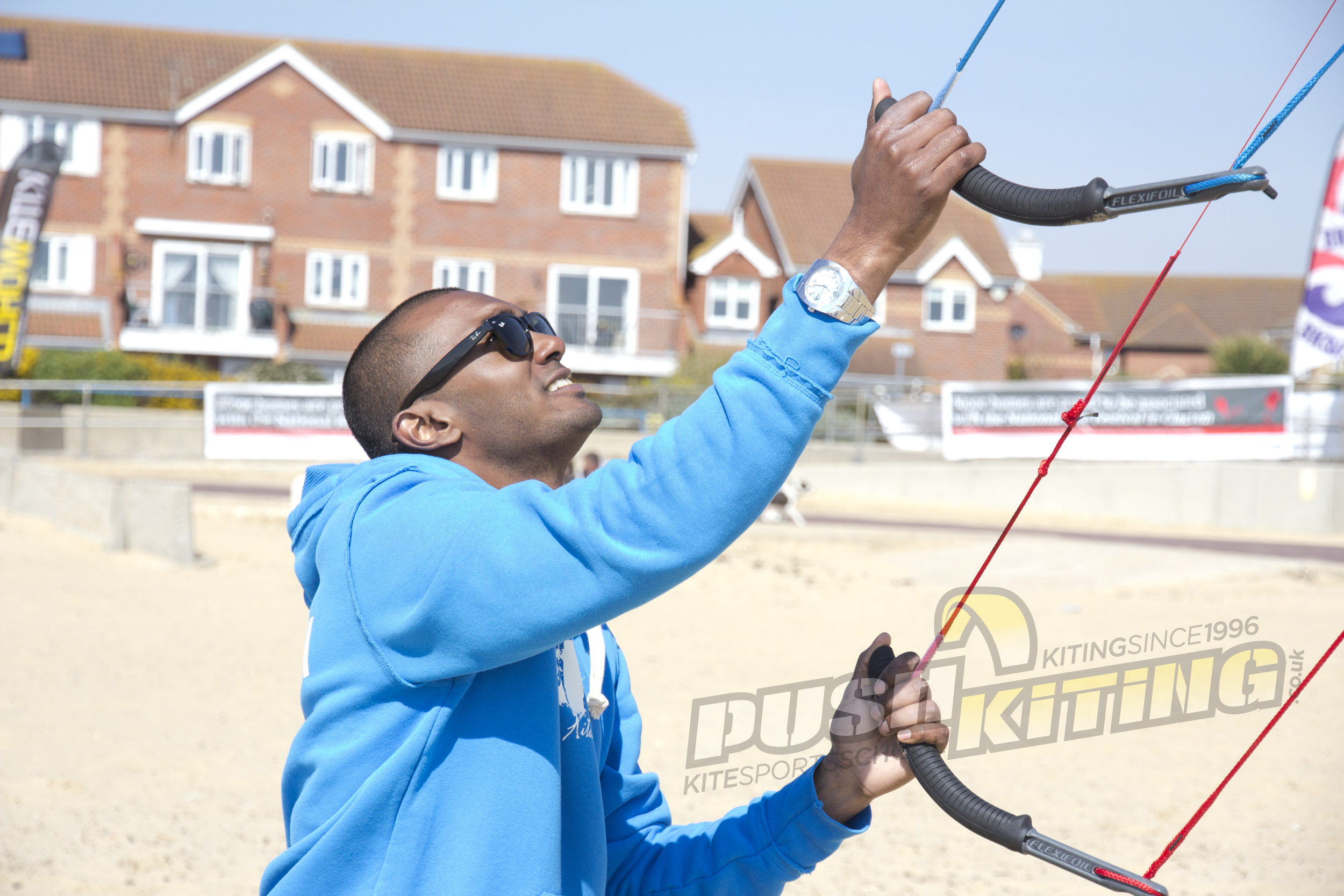 The rest of the fleets registered with a riders briefing held at the marquee at 9.30 am – a tad late as there had been a power cut in Clacton in the morning.

A start time was called for 11 am to allow the tide to come in over the overflow pipe.

A full day of competition was held for all the Racers who completed 5 races in a stiff North Easterly as they completed 3 races back to back in the morning with an upwind downwind course and in the afternoon another 2 races were held.

The North Team were out in force with Oli Bridge showing a clean 5 wins in a row followed by Steph Bridge , Callum Edge (2010 champ) and Denzil Williams (2011champ) close behind. The rest of the fleet found it hard in the challenging conditions of the cold and the strong current. 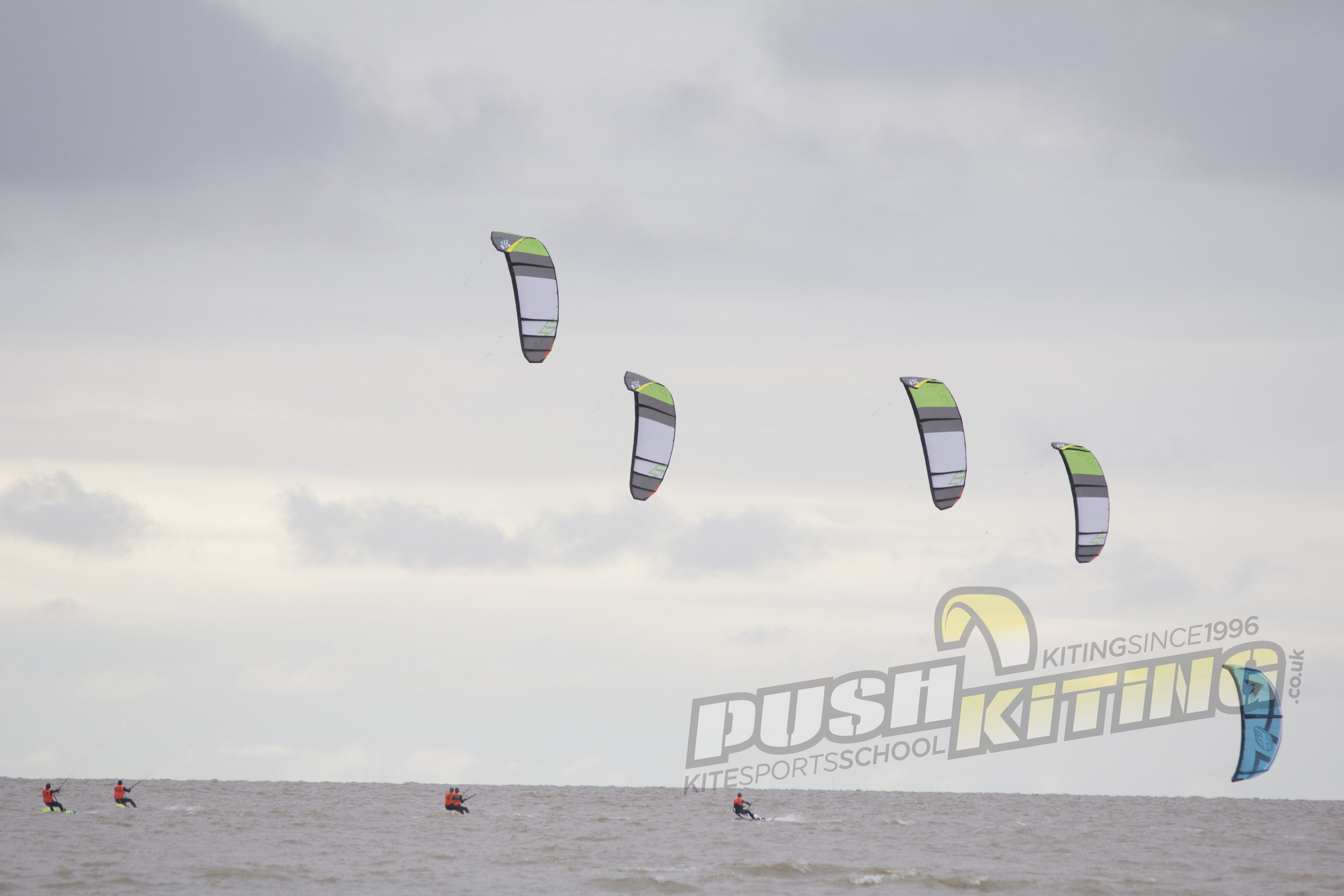 The Freestyle eventually kicked off with the Youth category and there were some new faces here that had previously been in the juniors. Competition was fierce in the competition zone that was close to the beach. Some great moves were made resulting in Tom Bridge taking the win ahead of George Dufty and Jordan Hurst. 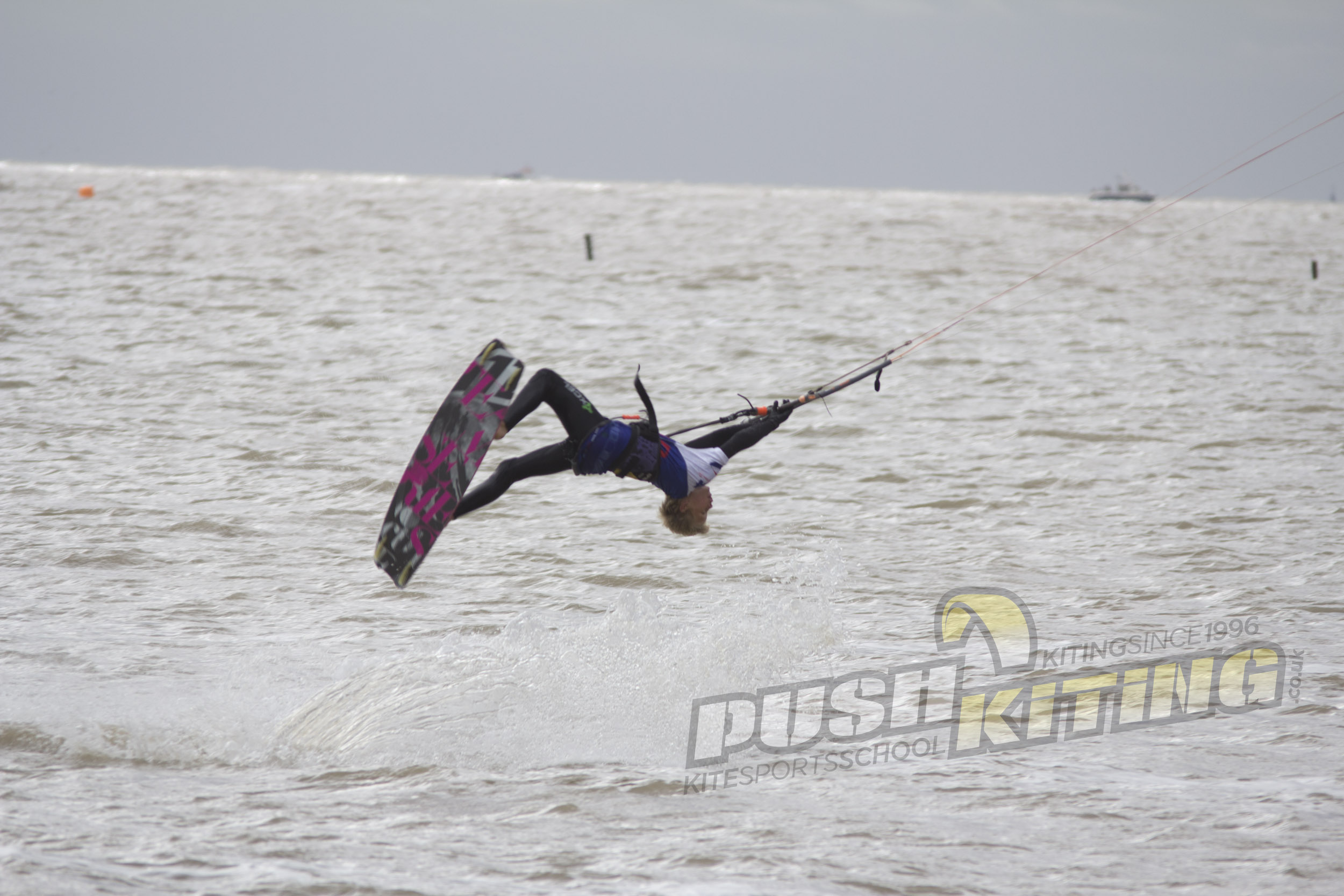 The first heats of the Amateur Ladies were under way however the wind faded away and the completion was held off to the Sunday morning.

All the competitors then headed off to the Martello Pub for a full roast!

Race briefing was at 9.30 am with a SW wind promised with a touch of drizzle competitors were keen and ready.

The racers went out to compete in another 4 races and Oli Bridge was again unbeatable – however the other racers were mixing it up for the other places below with some very close finishes there was only 1 point between Cornish duo 4th placed Denzil Williams and 5th placed Lee Harvey – that is close in 10 races!

The Freestyle event got underway with the Amateur ladies the wind was fairly light with most riders using 12m kites. After the first two heats it was the turn of the Senior Men who were mixing it up with old school big air and new wake style tricks. It was then back to the Amateur Ladies heat 3 which would see the loser make it into the final – the lucky girl was Chloe Durrant

Back to the seniors however the wind dropped to much – the heat was rerun twice however it was black flagged due to the dropping wind.

It was straight into the Am Ladies Final being a touch lighter – Rosanna Dury put in a great display staying in the zone and landing a multitude of tricks to take the win.

It was then decided to run a slope style for the rest of the competitors – this allowed competitors to ride past the judges one by one to show their best tricks off.

They had 3 chances and had to line up one by one – there were some very technical moves landed in the light wind and there was a great show for the audience on the beach.

Pete Jones the master of light wind was out with his 17m Slingshot took the win with a couple of technical passes one of which he had only just learnt! He was awarded the King of Watersports best move prize.

Prize giving was held at 4pm

Many thanks to all our local sponsors, tour sponsors, local helpers and our fantastic race crew.