June 23rd and 24th saw the 3rd running of the Edge Race Cup, now established as the premier kitesurf racing event in the UK.  The record entry of over 40 kiteracers came expecting great kitesurfing conditions and were not disappointed!  Amongst the entries were organiser Steph Bridge 4 times Kiterace World Champion and previous UK National Champions Denzil Williams from Cornwall and Callum Edge from Weymouth.  The weekend also saw many 1st time racers get down to Exmouth seafront and join the action. 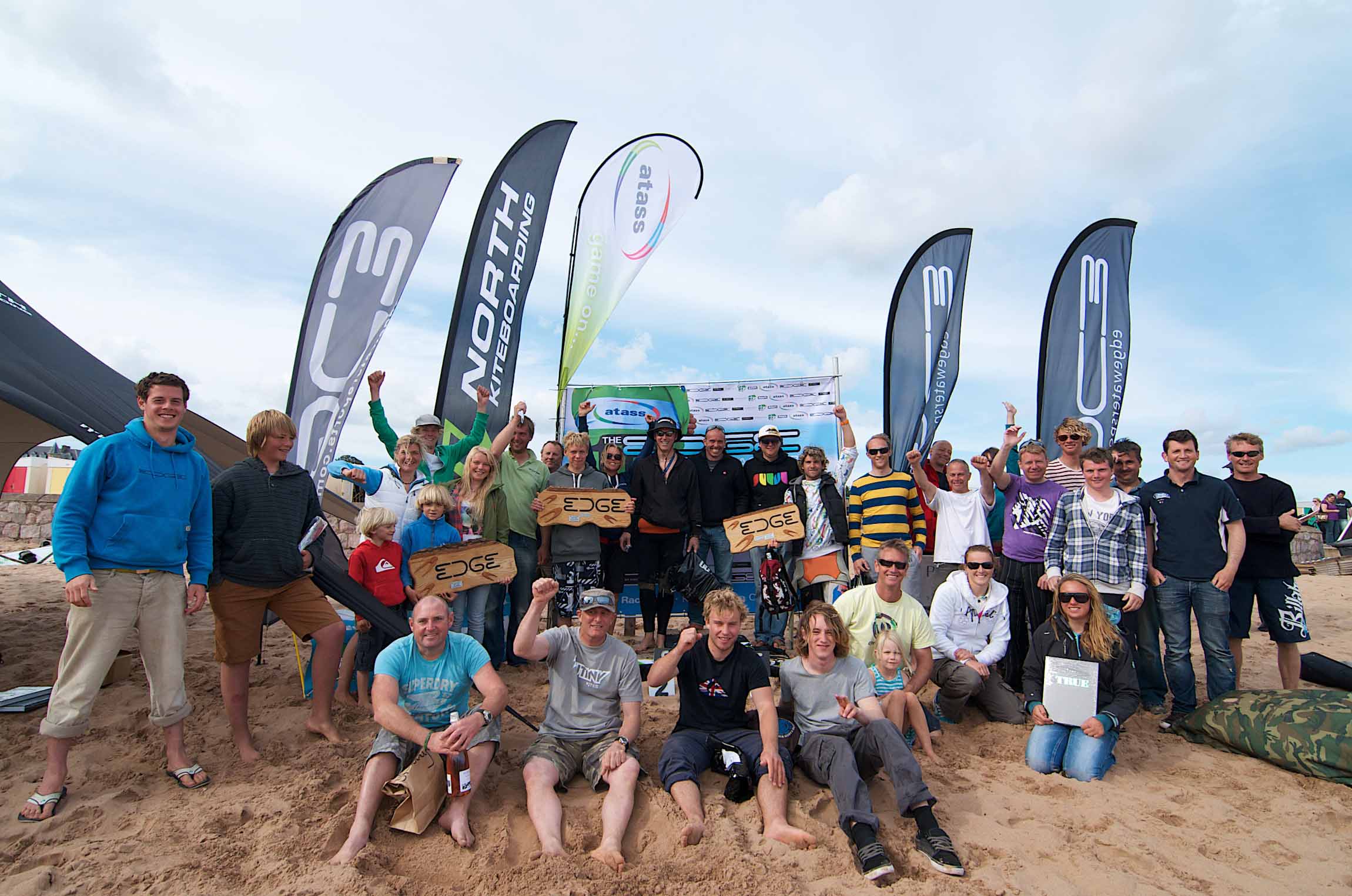 The action began on the Friday with a race clinic run by Lee Harvey and Steph  Bridge- 12 kiters joined and learnt up and down wind techniques, directional board footwork, stance, kite position and race strategy.  The day also saw the Royal Yachting Association in attendance to learn more about kitesurfing prior to its inclusion at the Olympics in Rio for 2016.

Saturday dawned with a good force 5 south westerly wind blowing and an out going tide resulting in challenging sea conditions ensuring the race board fleet were sent out on the water first.  3 races were run in quick succession with fantastic fast racing with the Exmouth Duo of Steph Bridge and her eldest son Oliver Bridge setting the tone for the weekend and dominating the fleet.  Oliver Showed amazing speed and control in the rough conditions and came away with 3 first places in the morning session. 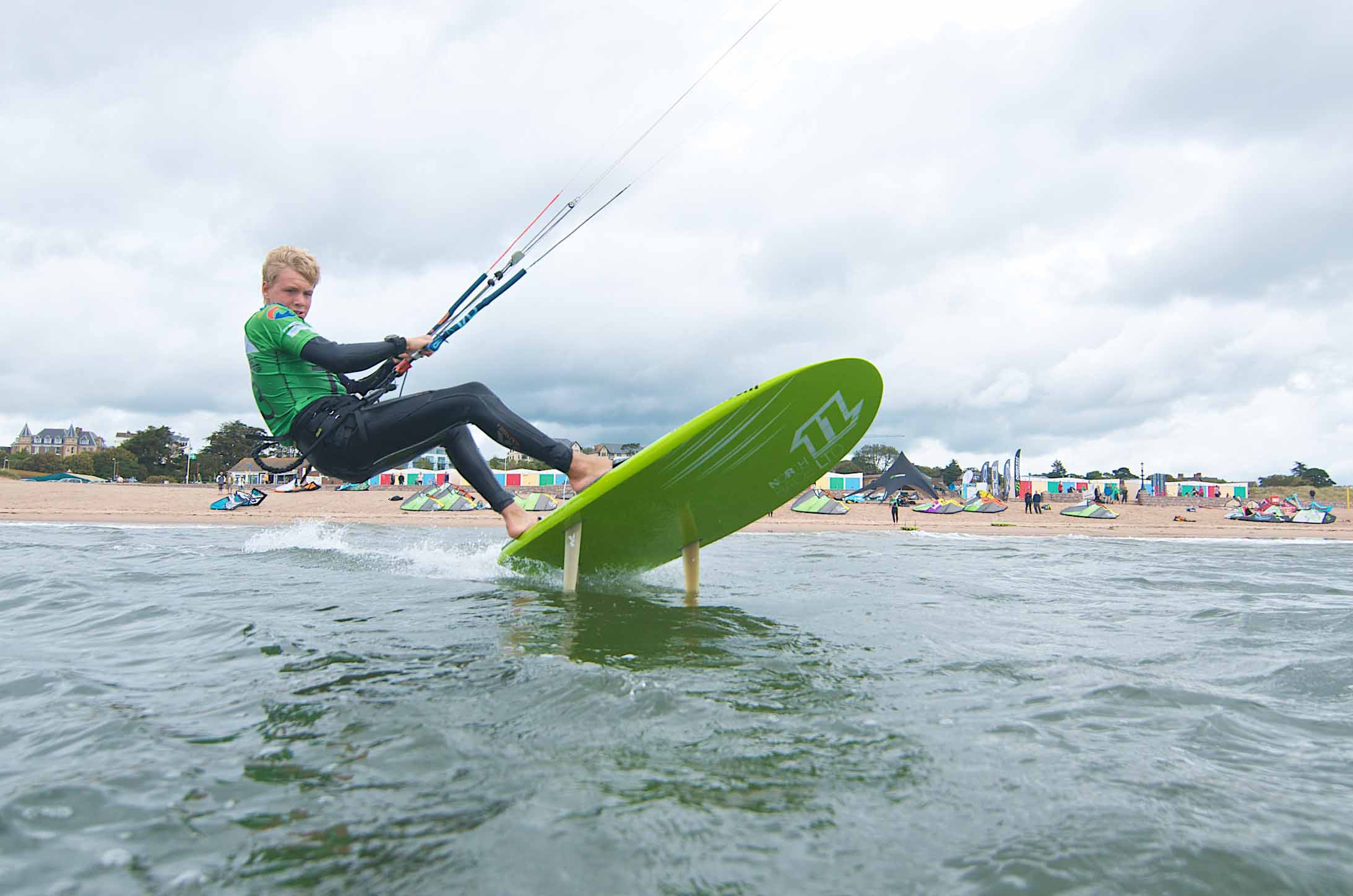 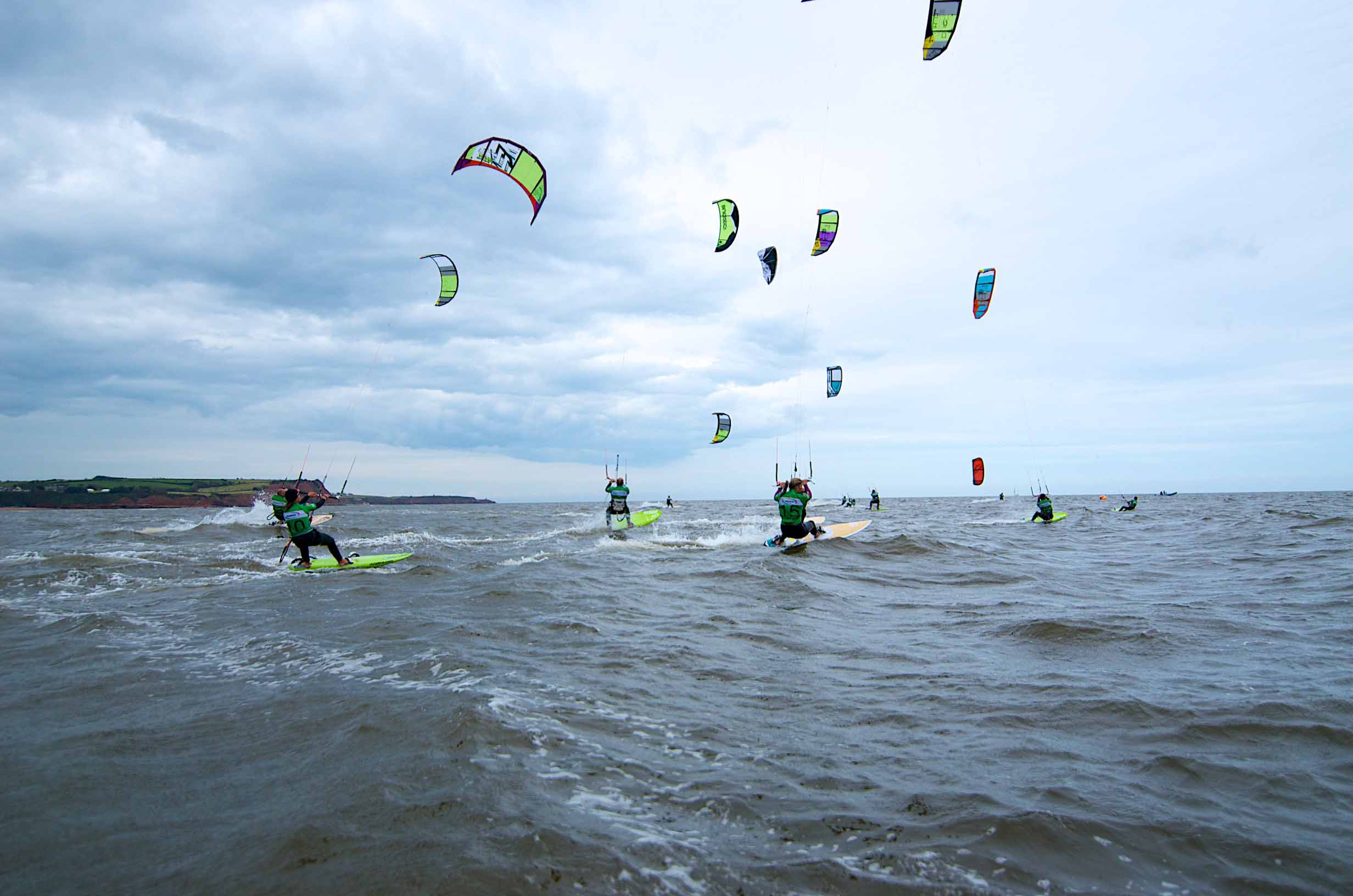 Then it was time for the amateurs and ladies fleets to get into the action.  Stand out performances were seen from Murray Smith from Dartmouth and Mathew Causen from Bristol as well as local teenager Alice shoulder in the ladies fleet.  After a brief lunch break the course was moved further out to sea and both pros and amateurs were sent out at the same time.  The sea conditions were now a little kinder and it was time to set both fleets off at the same time.  It was impressive to see forty racers all starting at the same time and some great racing continued.  In the ladies local rider Bel Bailey really came to the party winning a number of races and beating all the amateur men in 2 races but with Alice shoulder right on her tail the overall result was looking very tight.  In the men’s amateur fleet local doctor Tom Debenham was on fire getting some great results followed closely by another local James Bainbridge.  In the pros there was no stopping Olly Bridge with 2 more race wins abruptly ended with a disqualification in the last race for starting too soon.  Other pros with good results that afternoon were Callum Edge, Lee Pasty,  Denzil Williams and Steve Stubbs,  All they had to do was work out how to beat Olly!

The Saturday night party was hosted by the River Exe Cafe and despite the rain everyone had a great time with excellent food and wine provided by our  sponsor pebblebed wines. 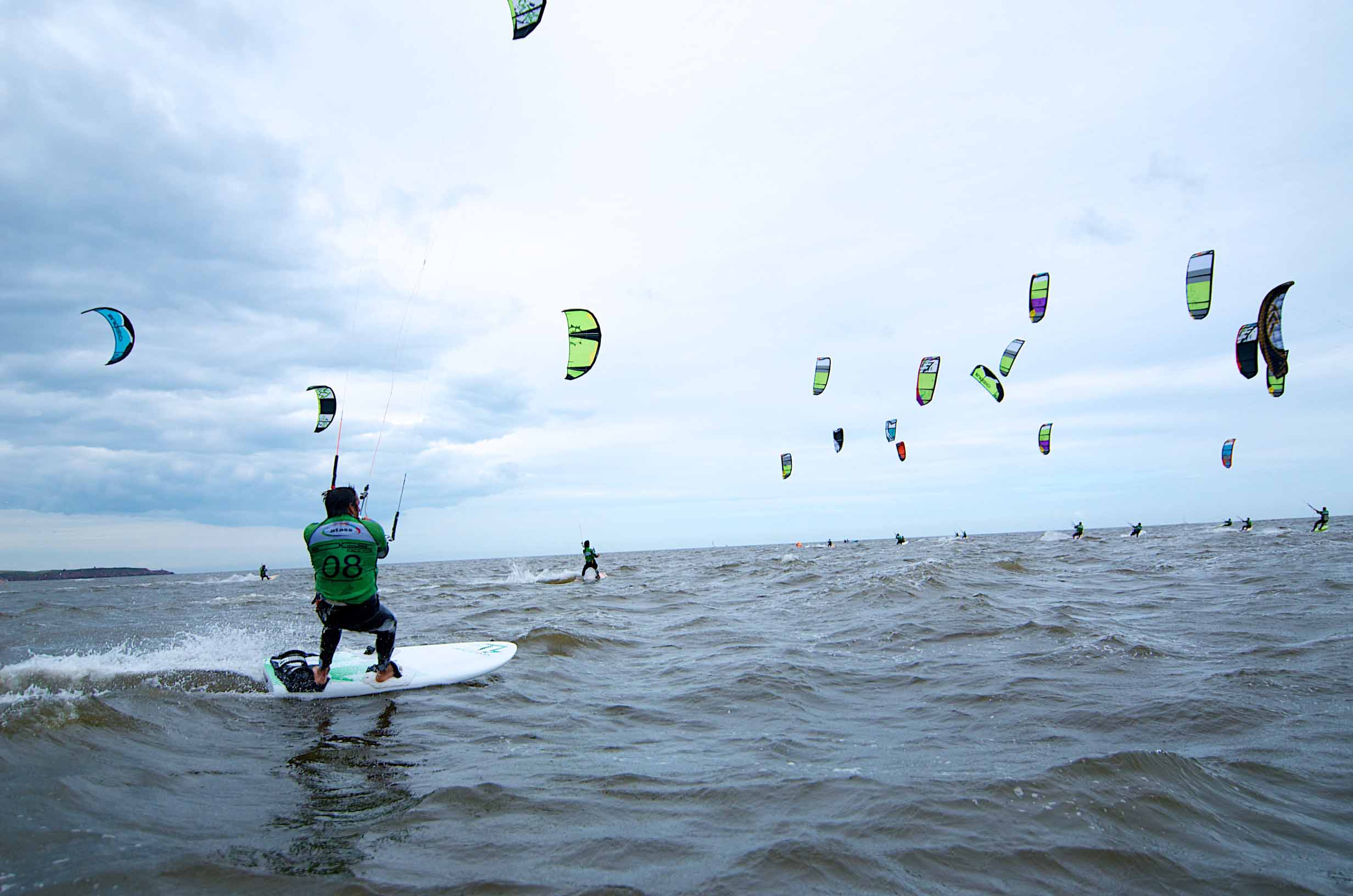 The Sunday dawned with light winds and the pro’s were sent out to do battle, in these very difficult conditions only 1 race was run won by Steph Bridge proving that experience counts when the going gets tricky.  The afternoon gave much better wind and slacker tides so everyone was back on it for the final deciding races.  In the ladies fleet it was a battle down to the wire between Alice Shoulder and Bel Bailey, both were super powered and gunning for the win just coming out on top by 2 points was Alice in her first ever race event!  In the amateur fleet it was down to a 3 horse race with Murray Smith just edging out Debenham with Bainbridge third. 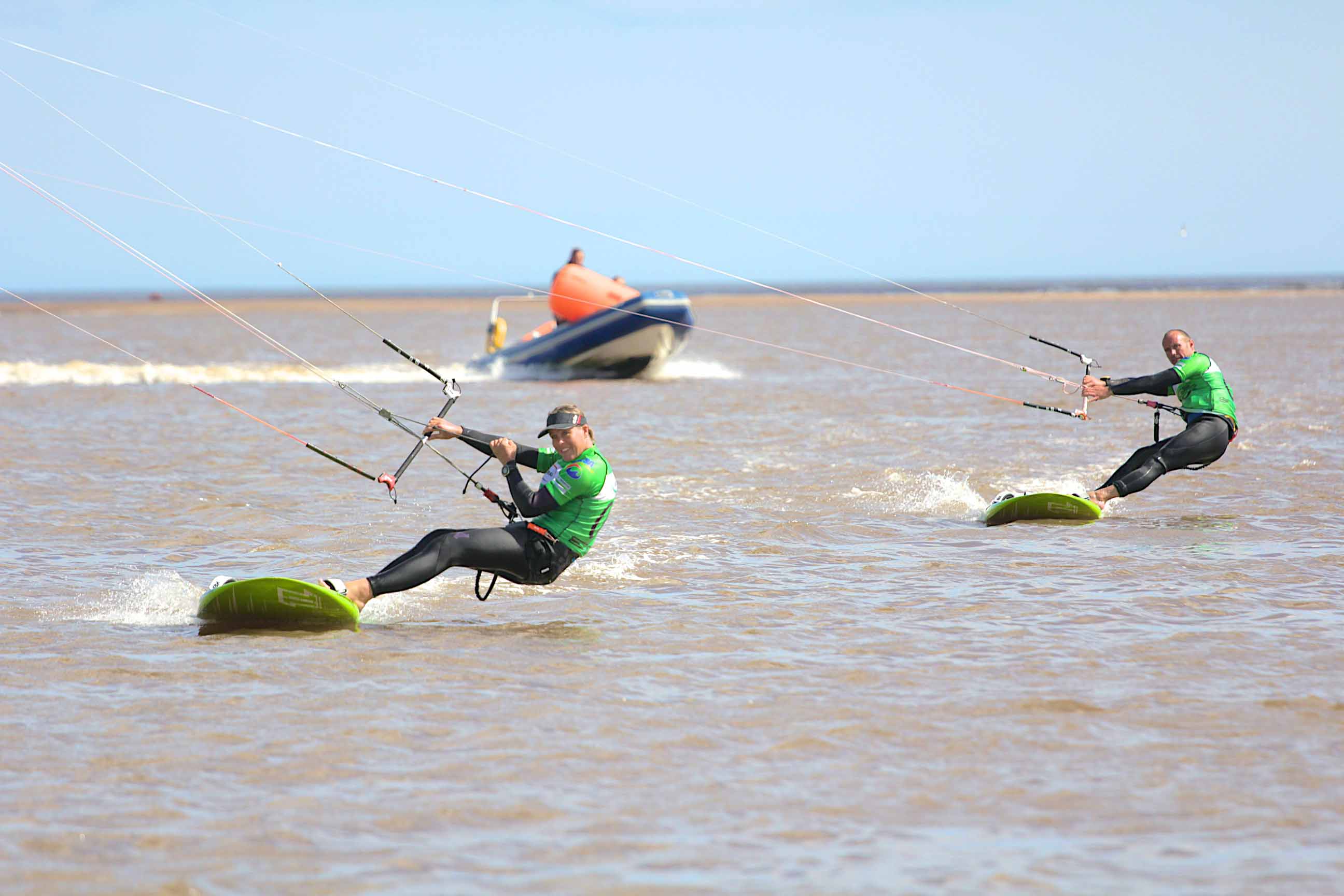 The Race board class continued to be dominated by fourteen year old Olly Bridge winning nine races out of eleven, an amazing performance, second was Steph and third  Callum Edge.

It was a great weekend of racing and enjoyed by all participants, roll on 2013.