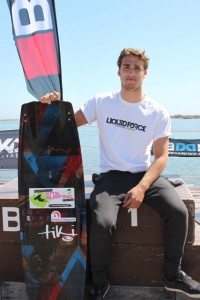 I had an interesting journey to this years event with my flights cancelled and spending 18 hours on the road instead. I managed to get a nice ride the day before the event.

I got a bye into the second round against Victor Deblock of France. I managed to win with a good heat landing tricks including a backside 3, grabbed Slim, and a 315.

The Quarters against French rider Lucas Vergez. With another solid heat including a slim 5 and a grabbed KGB, I got into the semis against Arthur Guillebert from New Caledonia.  However, by the time the semi was run the wind was dropping out and the heat was black flagged so the day closed without a result in the single elimination.

With no wind for the next 3 days the announcement was made at prize giving that 1st place was to be shared between the four semi finalist so even though shared, I can call myself European Freestyle Youth Champion. Time to work even harder next year and win the title outright.