Jonnie Hutchcroft is the British Sailing Team’s Youth Coach and is also in charge of the Girl’s #Kite4Gold programme – an initiative to find and then train female talent for the Paris 2024 Olympic Games.

In the recent IKA Kite Foil World Championships at Lake Garda in Italy in May, British men took two of the top podium places, while Ellie Aldridge, a new comer to racing and one of the chosen five Kite 4 Gold women finished 8th in the world, just one place behind the awesome Steph Bridge. 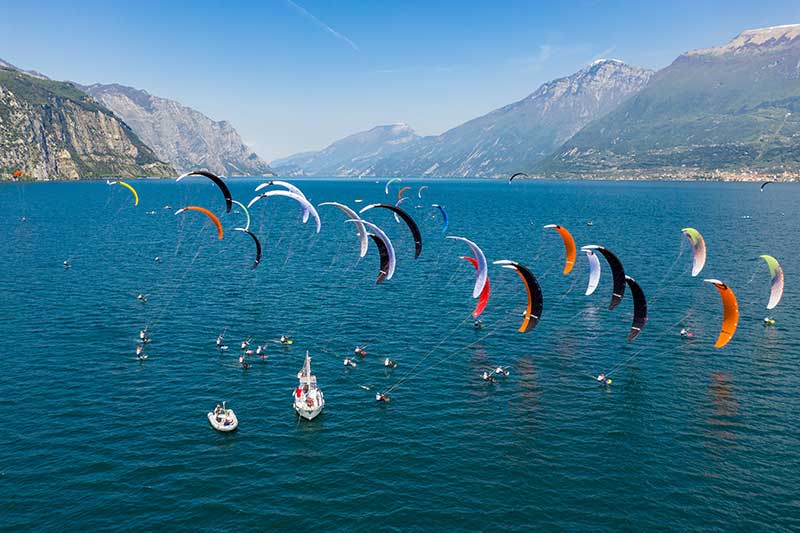 Something’s working! Jim Gaunt caught up with him to hear what he had to say on the performances in Italy:

“From mine and also the British Sailing Team’s perspective, we’re really happy with the results. Getting three boys in the top ten and two of them in the top three is amazing. On the girls side, we’re also really happy as they started in September and we’ve fast tracked them through and slowly but surely taught them what they need to know. We’ve still got a lot to go through, but it’s a constant work in progress for them.

“Some of them have gone from twin-tips, through surboards and LEI kites and then only made it onto freeride foils just before christmas. Then we went to Mexico for training in January where they went from freeride foils to race foils with foil kites. That was our first foil kite camp and we’re still working on manoeuvres and improving, from basically being able to tack and gybe to more intricate stuff, like elongated tacks and gybes and when you’d use those. 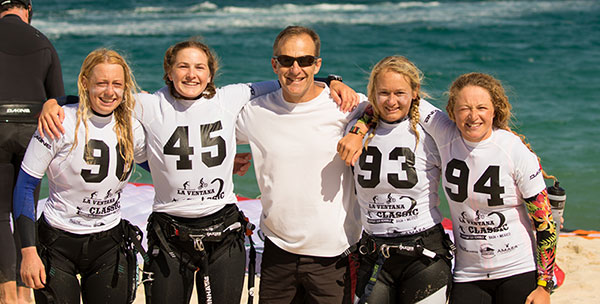 “Also speed is obviously a big factor and we’re starting to load the foils instead of just standing on top of them. That puts extra strain on the body and the crashes get heavier.

“The training team isn’t only me, we’ve got a full medical team back in Weymouth, with pyschologists, doctors, physios and sports scientists, plus all of the admin staff who are important to the day-to-day running of the team.

“Every week I see a jump and improvement in their performance. Foiling is one of those things where you get something and you start working on the next manoeuvre and then you usually plateau. Then you break through that again. Sometimes it’s frustrating but you suddenly overcome it. So my job is to help them overcome these things and fast track progress.

“Next event is at Hang Loose Beach in Gizzeria, Italy for the KiteFoil Gold Cup, but we’re out a week before because we have a full English training camp running. Then it’s the Europeans at Sardinia.

“We’ve been working since September when we started with 130 women and slowly paired them down and now we have five remaining. It takes a lot of time to get things going and there’s a lot of organisation behind the scheme, but we were one of the first countries to jump onto it. And we’re all really pleased with the results.

“Ellie Alldridge was top ten in the world and all the other girls were brilliant, too. At the end of the day you just watch them and one of the proudest moments was when they all lined up together and went off upwind. You think, “Oh god, we’re there.” At the Worlds one of the most amazing things for me was that I was so nervous for them before the first start. I’m used to international competition, but I was nervous for them and it’s the first time I’ve had that feeling. They give it their all out there and they’re working hard towards a goal that’s very difficult to achieve.

“On the Youth side we’ve got a lot of girls and boys from kiting who are now racing, but already a few from dinghies. Without a doubt there will be more and more crossing over as they get to hear about it and come along to weekend and holiday training camps that we’re running.

“It’s really good now that kiters are getting this sort of help from UK Sport and Lottery money. Also, the money direct from the RYA as well and it’s all very positive from the upper management. They’re all really interested in the kiting and say it’s amazing, so we’ve been well looked after.”