The ISAF kiteboarding format trials wrapped up last Sunday in Santander, Spain, which will be host to the 2014 ISAF Sailing World Championship. The original task – finding a racing and event format that shows kiteboarding at its best – was completed quickly with a great outcome that will give the sport another boost. The new format is made for fleets of any size, but adds spectacular elements and a medal race series in elimination, which will add all the drama that other sports have – this is the way how heroes are made.
The even more important task – to showcase that kiteboarding is mature and ready for the 2016 games – was also handled with bravery. The ISAF evaluation panel as well as ISAF president Goran Petersson and vice president Teresa Lara were impressed by performance and professionalism – and well noticed the excitement that kiteboarding is able to create to bring a completely new audience into the sailing family. This is especially true for all the kids in the emerging nations – kiteboarding equipment is the most affordable one of all Olympic classes equipment, it can be bought in every shop on every beach in the world, and it does not require expensive infrastructure, neither harbors nor in terms of travelling as it can be taken as normal luggage on any plane. 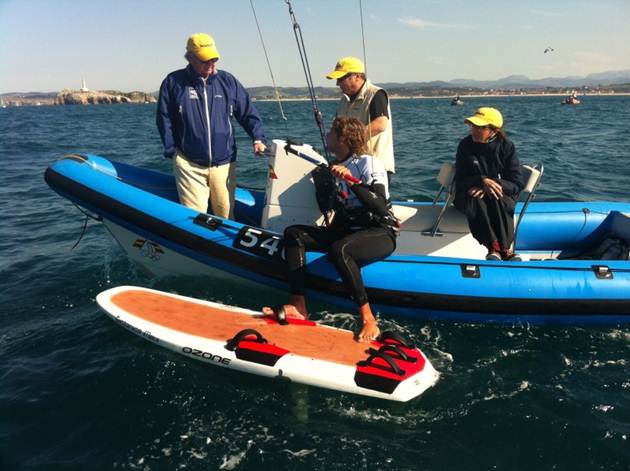 The ISAF equipment committee representatives had a detailed look at the equipment and class rules – many boards were measured and weighted, and it was definately a surprise that such high performance can be achieved with equipment that has a total weight of slightly more than 10 kilogram – ready to sail, including board, kite, fins, bars, and wetsuit. 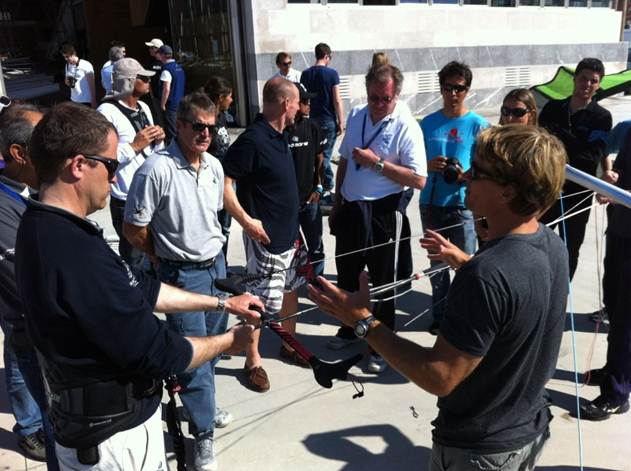 The event kicked off with discussions about the formats to evaluate – luckily there was not wind on the first day. A lot ideas were exchanged and finally a list of 7 formats agreed to be tested, varying from standard windward/leeward course racing to downwind slaloms with jumps like in supercross.
The 18 sailors from 10 nations and 4 continents read like the who is who of the international racing scene: course racing world champion Johnny Heineken, Slalom World Champion Damien Leroy, World Champion Steph Bridge, European Champion Katja Roose were accompanied by many national champions. And everybody more than keen to showcase our sport – this time not to win a regatta, but to win all of us some medals for Rio de Janeiro.
With sunshine and warm temperatures the wind arrived on the second day then – just enough to get the fleet out in 6-8 knots to complete the formats that are well known – course racing on a windward/leeward and slalom. This order was chosen to give ISAF a baseline on what sailing knows about – racing around marks. The upcoming days were planned to head over to new formats that have never been run before and see if there is something better or if it is better to stick what we have. 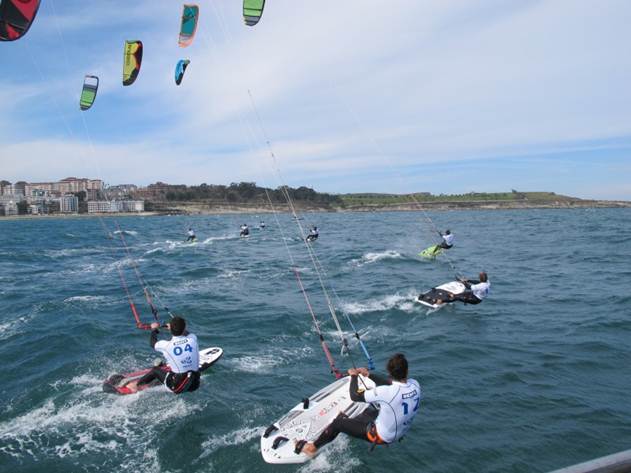 Some of the sailors were equipped with GPS devices to keep record of the upwind and downwind speeds, and it turned out that the racing equipment goes upwind with app. 15 knots and downwind with app. 25 knots – in 6-8 knots windspeed this means four times the speed of the wind and is a performance formerly known only by multi-million-dollar Americas Cup yachts.
Day 3 kicked of with more wind and a new format called enduro – a short upwind leg and a downwind slalom with a jump on the way to the finish line. This format gave quite some excitement, but was missing some tactical options, however the spectators on the beach appreciated the jumping and that it is easy to follow who is leading. 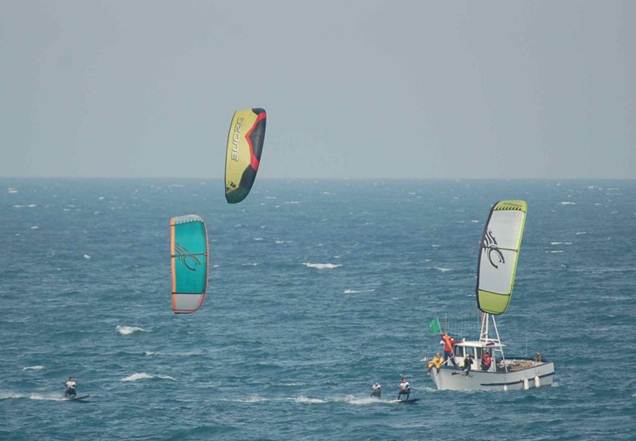 Around 1600 in the afternoon – with still 16-18 knots on the course and 1-1.5m rolling swell – the last format on the list was tested. A windward/leeward double gate course, but with a reaching start at the top and run in heats of six sailors. The starts were exciting, if sailors are fighting for the best line with board speeds of 30 knots, the downwind and upwind parts were tactical with a lot of position changes, and the final reach produced quite some photofinishes. For those that have seen the Americas Cup World Series Course – this is pretty much what it is. The same excitement, but for a fraction of the costs. 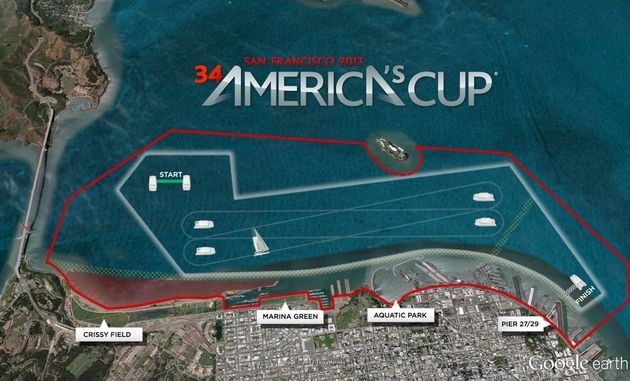 The additional thrill of this course that it would be run in elimination series – instead of a medal race, a series of heats with the top 16 would be held, with the last 2 eliminated after each heat, until the final four heat – the winner takes gold, the last one gets only a sorry. Finally in sailing, a story can be told with all the excitement and drama that other sports have, this is the way to build heroes. 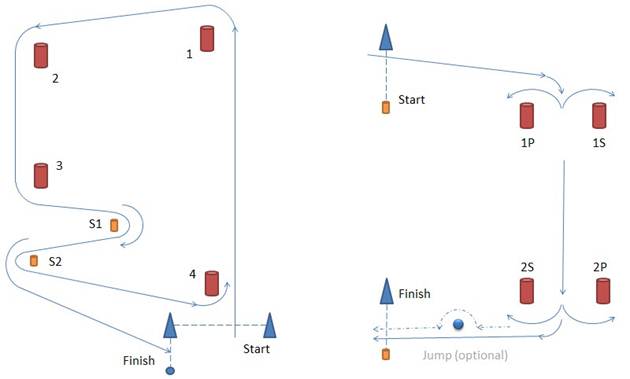 The remaining two days were meant to finetune the courses and prepare the reports, however on day 4 the breeze kicked in at late afternoon and some racers headed out from the harbor to the race courses of the multihulls and skiffs to battle them – well appreciated by the sailors of the other classes to showcase different kinds of high performance sailing.
The final outcome of the evaluation trials is to hold fleet racing on a new box slalom course, adding equipment handling skills to the required tactical sailing plus having reaching legs for better spectator understanding, and a short track course for the new medal race series, with the winner taking it all. 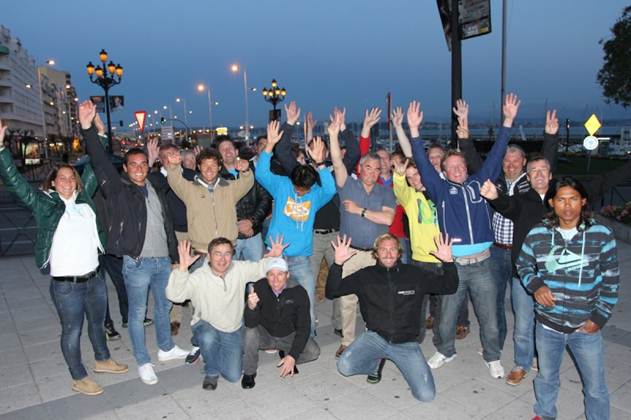 In the later evening and on Sunday the trials finally came to an end – with another discussion between the ISAF evaluation panel and the sailors how to progress from here to get kiteboarding into the Olympic Games 2016.
The options on the table are:
– windsurfing only
– kiteboarding only
– team events of both sports
Lets hope ISAF is taking a wise decision in the interest of the sport – the International Olympic Committee is watching us, and we hope that sailing got the message to bring new and young sailors into the sport, especially from emerging nations. The best to do so is surely through kiteboarding. After this week in Santander no one has a doubt about that.