With the advancements in light-wind-specific kit it’s never been easier to get out when things are marginal.  Of course, those light-wind conditions do bring their own unique challenges.  Whether you’re pushing the bottom end of your existing quiver or trying to squeeze the most out of the latest dedicated light-wind kit, the principals are the same.   Here are a few pointers to help you make the most of the days when you’d normally be stuck on the beach. 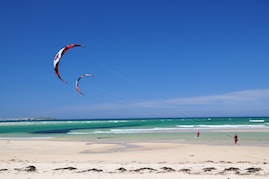 Don’t choke!  Another common mistake is ‘choking’ the kite.  This means over-sheeting, or pulling the bar too far in.  In light wind, the kite will simply stop, and worse, it may back-stall (fly backwards).   It’s air moving over the leading edge that’ll build power in light wind, not static grunt from the sail area presented to the wind.  Avoid this by keeping the bar further out and allowing the kite to build speed, working it nearer the centre of the window where there’s more power.  As your board speed builds and the kite develop more power, then you can let it fly further forward in the window and start to edge more.

Beware the luff.  While we need to be careful not to choke the kite, we don’t want it over-flying either.  Over-flying, or ‘luffing’ is when the kite flies past you – out of the back of the window – and then drops to ground as air pressure on the top of the canopy forces it to adopt a nose-down attitude.  This is most likely to happen when stationary or walking to/from the waterline and is usually caused by too little bar pressure and tension on the back lines.  Avoid the dreaded luff and subsequent ‘hindenburg’ (kite falling out of the sky) by keeping some tension in the back lines while moving to or from the water.  Not so much that it starts to back-stall, but enough that it doesn’t rush forward and over-fly when a gust hits.  Of course, once you’re in the water and moving you need to ease off and make sure you don’t choke the kite (see above).  As with everything in light-wind riding, it’s all about ballance and moderation to squeeze the most of the kit and conditions.

Like everything, light wind riding take practice, but it’s worth it.  And don’t forget, your Local British Kitesports School is the perfect place to book a refresher session or some coaching to hone your skills.  Find your nearest school here: https://www.britishkitesports.org/training/uk-kitesurfing-schools.html