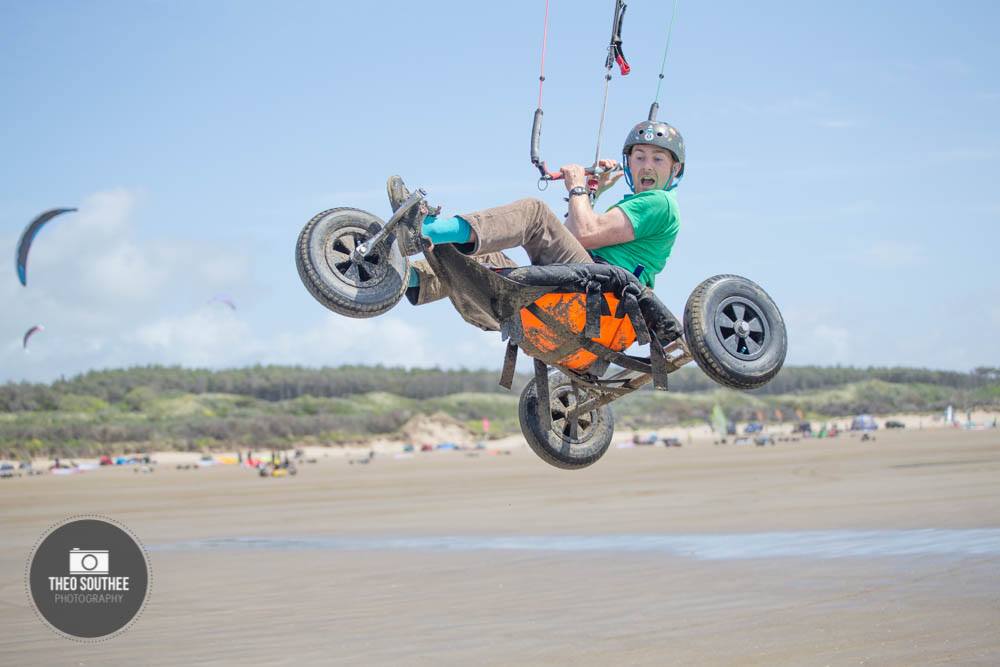 No Barriers Land Sailing event held at Pembrey Country Park on 4th July is THE annual event for Land Kiters, it’s run by CLSC (Carmarthenshire Land Sailing Club) in South Wales.  It’s a really well organised event, the club members really know their stuff, and it attracts sponsors at different levels ranging from raffle prizes (for charity) to sponsorship of the Hog Roast (definitely very welcome after a full day at the beach).

The event grows much bigger every year, clear proof that the No Barriers team are doing something right.  It’s really nice to see kiters from all over the UK and some from Europe reaffirming that “the good old days” of kiting are not a dim and distant memory.  If you run an event that is worth attending, people will attend.  It really is that simple.  Okay, the insanely good beach probably has something to do with it.

After the signing in and rider briefings, people started to walk to the beach from camping zone in the country park and were greeting by quite a bloom of jellyfish, a fairly short strip of dry sand, then a large expanse of super-flat but still drying sand.  Some of the guys who also kitesurf had taken the opportunity to get out while the tide was still a good way in.

You really cannot grasp how large an expanse of beach this is until you ride it.  Massive doesn’t do it justice.  There are some rocks you can see way in the distance sticking out from the dunes, there’s about another 4-5 times that distance again.  Once the beach had dried enough to get round those rocks a few riders headed out to do full runs of the beach, the top end of the beach was already super hard, and super flat.  A good way beyond the rocks there were few fisherman’s nets out and a good number of un-covered posts (but clearly marked for us, and very clearly explained in the briefing).  I was getting about halfway down the beach, and my downwind leg was giving up, I had to hold onto the upwind foot peg to take some pressure off.

Hooning down the beach with a small band of kiters is difficult to describe.  You just can’t help but grin at the other guys around you.

Back at camp in the evening, there were a good few slightly reddened and very weary looking riders.  It was good to catch up with a few people and answer some questions/concerns about the BKSA structure and who to contact.  I think this was possibly the most worthwhile aspect of my trip – particularly how we can help Wind Wheels & Waves down at Weston and how we can continue to help PKA (Para Kart Association) – especially with the Euros possibly coming to the UK in 2017.