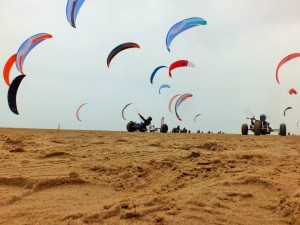 After an initial change of date from October to September the PKA 4 Nations was upon us.  This event was initially a 4 nation’s challenge for the English, Scottish, Irish and Welsh due to the cancelation of the class 8 world championships; however interest from across the channel saw representatives from Holland and Belgium coming over to join the event.  The event ran over 5days with the 4 Nations cup being held on the middle 3 days.  The first day was a practise and the final day for those wanting more punishment, a 4hours endure.

The first day initially started with registration which was over very quickly as the beach was in a great condition and everyone wanted to head out and get some practise in.  It was a good afternoon with some light winds, most were on their larger kites and it was a good opportunity to examine the beach, get those tyre pressures adjusted, meet and catch-up with those we hadn’t seen since the Europeans in Borkum last year.  In the evening the remaining few arrivals appeared, we did some last minute preparations, and sorted the teams for the following days racing.  The English were split into two team based on the current rankings, the Belgium’s joined the Irish and the Dutch spread between the English, Welsh and Scottish team, to help level the playing field for the team event. The night finished with a good curry and a few beers.

The eagerly anticipated first day of racing was finally upon us.  The wind was up and it was another sunny day, the pilots briefing was due at 10:30 on the beach and by 10:00 everyone was out the ready to go, so we all had some practise time to get a feel for the course.  The briefing was held promptly and the first 15minute count down given.  9 – 13m kites were the choice for many and the first race was underway.  The course was a good one and it seemed like everyone were enjoying themselves.  A further two races were held prior to lunch break.  The Dutch continent made a very good start with Jereom taking the first two races and Arjen the third, Ryan was close on their heels with two 2nd’s and a 3rd.

After lunch it was announced that we would complete a further 3 races to get the championship off to a good start.  The wind was very similar to the morning, however after a quick tyre check we soon realised that due to sun our tyre pressures were all over the place, a quick adjustment and it was on with the next race.  Another 3 good races were held bringing the total for the day to 6.  After the days racing my first task was to input all of the scores to the scoring software which we completed quickly and headed over to the sailing club for the days presentation. 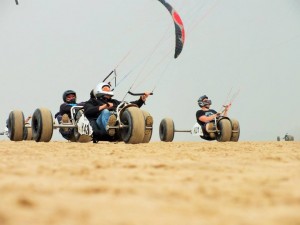 On the second day, again it was another sunny day but the wind was lighter.  The course was set and it was a little simpler than the day before due to the conditions.  Almost everyone took their biggest kites and there was a lot of sharing to make sure everyone had a good opportunity to get some laps in.  The races today were very tough, with some parts of the beach having sufficient wind to get going and other where you were just flying on apparent with and the slightest of mistakes were very costly.  A lot of people were struggling and it was over to the lighter pilots to have their day.  Despite the lack of wind we still managed to get 3 races in with one taking well over 1hour complete the 3 laps, which was a significant contrast to the day before were the leaders were coming in at under 20minutes.  It was a little quicker to do the scores today so we held the presentation at the kiting club house as soon as everyone was off the beach.

The results for the day were Ryan 1st, Adrian 2nd and Jort Noordhuis 3rd.

After the presentation we all headed over to a local pub for a meal and a few drink.  It was another good night that concluded with another visit to the sailing club.

The third and final day of the 4 Nations cup was quickly here and like the first day the wind was back.  8-13m kites were the preference of most of the fleet.  The first race was soon underway and it was imperative that you got a good start as the course was not too technically challenging so it was down to pure consistency to maintain your position.  After the first race we had another pilots briefing and it was agreed to change the course a little make it more of a challenge. A further 3 good races were held to conclude the championship with a total of 13 races.

Again it was back to the computer to sort the day and championship scores.  The presentation was again down at the sailing club.  The club laid on another good hot buffet so when everyone had had their share it was on to the presentation.  The day’s results were Arjen 1st, Jeroen 2nd and Ryan 3rd.

As this concluded the racing for 4 nations cup the final results could be announced.  It was certainly a close one with only 1 point separating 1st and 2nd places. 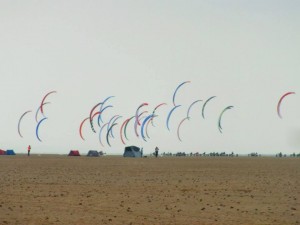 The final results were:

Full results can be found on the PKA website, www.parakartassociation.co.uk

This concluded the individual and it was just the team results to come, these were: England 1 in 1st, England 2 in 2nd, Wales in 3rd, Ireland in 4th and finally Scotland in 5th.

The Sundays 4hour endure had a much smaller fleet as many who had travelled far had a long drive ahead, ferries to catch and had to get away early or for some of us just a lot to tidy up!!  The wind was somewhat missing as the race was started and very little progress was made in the first half of the race, but then the wind arrived, and for those that had persevered it proved to be an entertaining finish.

Ryan won the race with Kev Arlott in second and Pete Stinson in third.

Finally a big Thank You to Mark Sherlock for organising the event, our race officers Chris and Garry and marshals (too many to mention your all) for running the racing, Peter Lynn for the Vapor which took all of the races wins, all of the helpers who did things behind the scenes, the sailing club for the evening venue, Lauren for the photos on this report, Steve Warren for the event video and finally all of the pilots who took part.