Westward Ho! witnessed the return of the UK’s favourite student kiteboarding competition as universities from around the country made the pilgrimage to the vast beach in Devon. 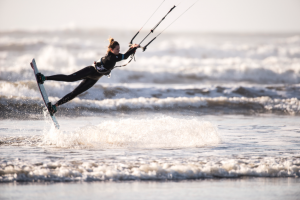 The weekend started with a warm sunny Saturday and teasing winds that never managed to pick up enough for competition to start. Despite the lack of breeze, the traditional action was replaced by freestyle man boarding, games of football and a welcome feeling of summer being on it’s way. The entertainment continued late into the night as the prize giving party was held at Milky Way Adventure Park, combining black tie attire with slides, ball pits and dodgems for some more unconventional madness.

A wet and over cast Sunday greeted the competitors, however with the rain came a strong onshore breeze that quickly cleared hangovers as wetsuits were donned for one final show down. Due to time constraints, the traditional heat format could not go ahead and was replaced by an hour-long expression session where judges would select standouts whilst everybody rode at the same time.

Big moves, comedy bails and large smiles saw the hour over in a flash, before Lewis Crathern himself announced the results.

Intermediate winner was Cedric Bontemps with a smooth backloop kiteloop to toeside.

Best bail was Matt Crupton with a glorious one and a half backroll to beach landing.

Man boarding was claimed by Southampton, pulling off two surface passes in one run.

Slopestyle winner on Saturday was Joel Edwards who landed a raley in zero wind. 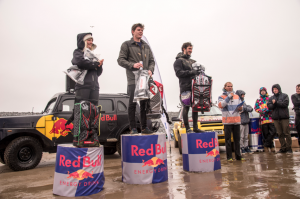 Non of this would have been possible without the help of the sponsors and students who made the event one to remember!