The 8th European Junior freestyle cup in St Pierre la Mer- France is an event that any young kiter under 19 years old will want to add to their wish list. Its normally windy, decent level of competitors, well organised, cheap flights to get to & the added bonus that if you get on the podium then you are in with some money!(which for this age category is pretty awesome) 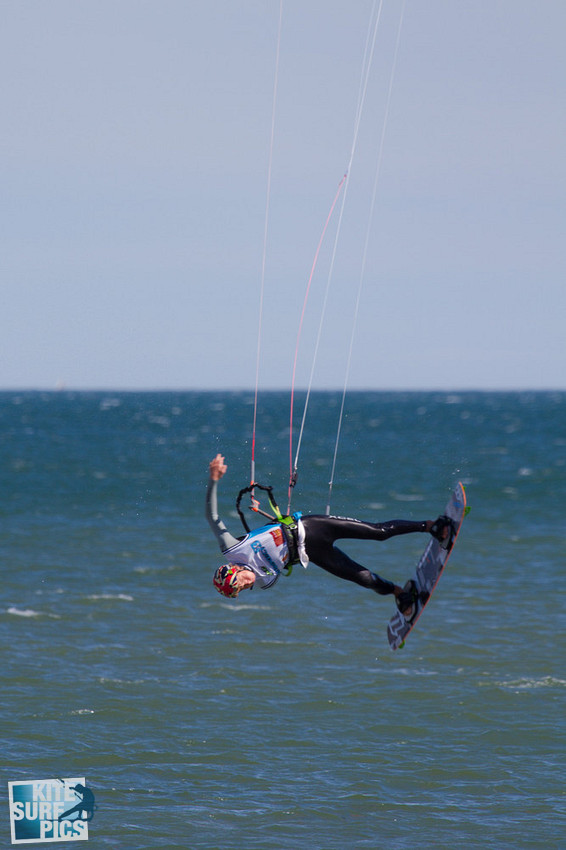 Team Bridge were also joined by UK riders – Jordan Hurst & George Duffy which made for a great beach atmosphere. Day 1 was too light for a freestyle competition which did’nt matter since this was taken up by
the massive Olympic news.

Occassionally logging on to some 3g to check on the robbery progress (this had happened the previous evening at our new shops) and suddenly get the twitter from Marcus @ IKA. I look & then another feed- from
Kristin Bose- I start wondering around the boat park trying to share these twitter feeds- just to check I am reading right- I find Gisela Pulido & we both have a hug & she then gets her phone out! Oliver, next to me is overjoyed, Eric is stunned & can not believe windsurfing just got thrown out in preference to kiteboarding. Convincing me I have been wasting my time lobbying, emailing, doing the ISAF evaluation trials and now suddenly his life (& ours) will change. All hope of wind this day are forgotton as we chat & share the news with all these young riders at the European Freestyle cup—youngsters from all over europe– under 19years old – all have huge futures ahead of them in a growing sport that is barely 12 years old!!!

We celebrate with a meal out, the 5 of us discussing & excited that our sport just stepped up a gear. I had said to Oliver that we would hold back on competition until the May decision was made & now all of a sudden we have a new goal- & its only a few years away. I say to Eric that I wish I was 10 years younger & perhaps going into my 40th year is a bit ambitious. On a personal level- lets just see how these next months go & develop. 2016 was always a dream for me, I knew that 2020 I would be past it but now its all a  bit more achievable.

I talk on the phone to Marcus from the IKA; we have worked closely all of us but without his drive, vision, motivation, hard work, intelligent thinking & hard graft this would NOT have happened.

Day 2 of competition was early o clock – 7.30am on the beach for 8am briefing with building tramontana wind forcast. We had a problem- Tom was down- either he had a bug or it was just way way too early. Guy, Oliver, Eric & I all pump up the quiver & Tom is up first. We get his wetsuit on & throw him on the water saying just do a few basic pass’s. He goes through to the next round but is definite not himself. Guy is in the 3rd round of the junior under 13’s & has a storming heat. Fully motivated & confident the wind now decides to switch & fight with a sea breeze, the day hottens up & we are all on hold. By 2pm it is back & Tom manages to string something together in an eventual final with Guy & dutch rider- Wouter Smeet. This is soon followed by a decent stronger more stable Tramontana & suddenly Oliver is up – BOOM- fully powered with a tactical heat showing his previous competition experience. Oliver has a few more rounds to then get to the quarter finals with a 16 year old North rider from Mauritius who has a great level but manages to land more consistently than Oliver to secure his place in the semi’s while Oliver gets a 5th overall in the toughest category with mostly riders age 15 & 16! The other UK riders George & Jordan had things tough. Not only an unfortunate draw but also dealing with gusty shifty off-shore conditions not easy. However- this is a massive motivation to just see the level & break out to their first event overseas.

It was obvious who was the strongest age category when we watched the 16-19 years who clearly had an easier task. I took a newspaper interview with the Independent followed by a virgin Conference call- the decision on which day to cross the English Channel with 14 kiters in the next 5 days!!!

Day 3 & I leave team Bridge & Eric to manage the boarder cross event while I take the Ryan air flight back early to the UK to begin the preparation for the channel crossing.

For any young rider this event is a must & for 2013 will be even bigger with a race category added also.