The Virgin Kitesurfing Armada Festival came to a successful end on Sunday evening after a fantastic weekend of Kitesurfing, SUP boarding, fundraising and record breaking. On Saturday, the Armada surpassed last year’s total participant numbers with 344 kitesurfers participating, which is so positive for the sport within the UK.  Then on Sunday a new GUINNESS WORLD RECORDS title was set for the Largest parade of paddle boarders with 256 paddle boarders travelling down a similar course on CBK beach, Hayling Island. An official GUINNESS WORLD RECORDS adjudicator was on hand to approve the record. 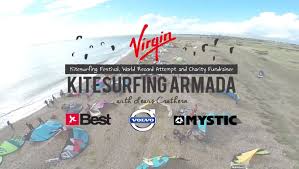 The Kitesurfing Armada was an event for all, attracting world champions, pro-kitesurfers, a double Olympic medallist and novice kitesurfers, with ages ranging from as young as 11 years through to 73 years.  The CBK beach was awash with spectators to support the GUINNESS WORLD RECORDS title attempt.

Director of the Kitesurfing Armada Dan Charlish said, ‘It has been a truly remarkable weekend, where once again we have been overwhelmed by the positivity and enthusiasm of everyone who got involved. Despite a challenging wind forecast hundreds of kitesurfers came to support the event. They were rewarded with wind on Saturday afternoon and the chance to create the Armada, which looked amazing as hundreds of kites filled the sky as the kitesurfers left CBK beach.’

The event has grown significantly since its launch last year, becoming a weekend festival which included live music, a big screen, local and international kite brands exhibiting gear and talks from kite pros and industry experts. Sir Richard Branson, whose company Virgin are title sponsors, sent a message of support to all the kitesurfers which was beamed onto the big screen during the after party.  Sir Branson said, “As a keen kitesurfer, I am fully behind the Kitesurfing Armada, at Virgin we are trying to support Kitesurfing in a range of ways and there are big plans for the future. I am sure the Kitesurfing Armada will be a big part of these plans and it will go from strength to strength over the coming years.” 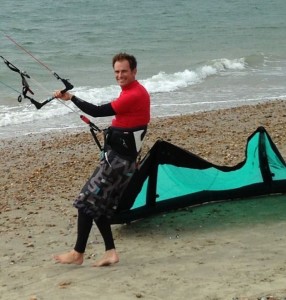 Dan Charlish said “It’s fantastic to have the support of Virgin, and many other sponsors including Volvo, Best Kiteboarding, Mystic and the local council without whom the event simply couldn’t happen. They provide support in a range of ways and enable us to cover the costs to run the festival – so we can ensure every penny raised on the water goes to charity. This year it looks like we have raised over £45,000 for our 3 charities Virgin Unite, the RNLI and youth charity Snow-Camp – which is a great achievement from everyone concerned.

Lewis Crathern, Pro Kitesurfer, Brighton Pier Jumper and event ambassador said, “Kitesurfing needs an event like this and I am very proud to be part of it.”

To watch the video highlights of the event and world record attempt visit: http://youtu.be/6PjJIr8dpDA