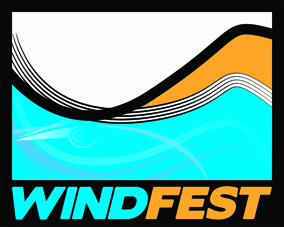 The forecast leading up to the event was a stormy one – however the wind gods were kind and gave us two breezy days instead of the gale force winds that were predicted added to that some sunshine and we were on for a couple of fun packed days of kitesurfing.

Windfest delivered the customary crowds of people, 13 racers all gathered on the beach on Saturday morning in front of the massive crowds getting ready to battle it out on the water, with the wind between 20-25 knots all the riders hit the water at 11 for the first race which was a upwind downwind course set just off Sandbanks beach which made it really easy to follow the racing for the spectators.

Olly Bridge ( 14 years old ) showed all the competitors why this up and coming lad is the one to beat with some great consistent results however the top 5 places were very close with Steph Bridge ( world Champion mixing it up with the boys – 4 races were run back to back and the racers returned to the beach for lunch .

Next up was the Freestyle Invitational with a real mixer of ages from 40 year old ripper Joe Hockley down to Tom Bridge aged 10 (yet another Bridge!)  However it the strong winds the more experienced riders showed there true form with British Pros Ned Taylor taking the win ahead of Richard Flindall in the final with a great effort from Tom.

After a short break it was decided to do another two course races back to back in an extended Triangle form – speed was the key here and Steph Bridge showed the boys who had the stronger legs – Denzil Williams and Ben Todd both did well in the races showing good speed .

Thanks to Richard, Joe & Chris in the boat and Peter on the beach and all the riders who made it happen; Gary & the Windfest Team see you all next year.